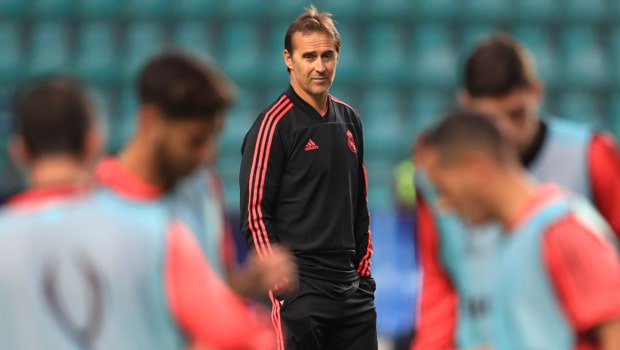 Real Madrid boss Julen Lopetegui insists he does not fear the sack despite seeing his side extend both their winless and goalless run to four matches in all competitions.

Los Blancos were beaten 1-0 at Alaves in La Liga on Saturday, with Manu Garcia’s 90th-minute strike earning the hosts a memorable victory that also saw them move level on points with Real in the early-season standings.

That poor run of form has seen the pressure mount on former Spain boss Lopetegui, who only succeeded Zinedine Zidane as Real manager during the summer, but he insists he does not fear the sack.

“A coach does not think about it (the sack),” Lopetegui told a news conference.

The 52-year-old did concede Real’s lack of goals is a concern and their cause has not been helped as both Gareth Bale and Karim Benzema were forced off with injuries during Saturday’s defeat.

“Obviously, peace of mind would come with a goal,” he added.

“I also tell you that defeat is an excessive punishment. We have to try to recover, we have had many misfortunes.

“Today we had two players who were injured. We know we are not in a good moment, but we are in the month of October and we want to return as quickly as possible to win.”

Real will now have to lick their wounds during the international break before they play host to Levante in La Liga on October 20.