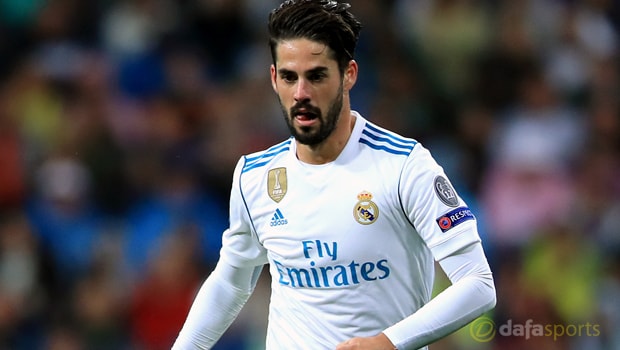 Isco feels he is facing a struggle to win the confidence of Real Madrid boss Zinedine Zidane.

The 25-year-old, who netted the first hat-trick of his career in Spain’s midweek 6-1 demolition job of Argentina, has fulfilled a bit-part role at the Bernabeu this season.

Diego Costa opened the scoring for Spain early on against the 2014 World Cup runners-up before Isco struck either side of a header from Argentina defender Nicolas Otamendi.

Thiago Alcantara added a fourth, with substitute Iago Aspas also getting in on the act before Isco hit his personal milestone.

In a thinly-veiled barb at Zidane, Isco suggested playing for Spain “gives him life”.

“In Madrid, I don’t have the confidence a player needs,” Isco said in a post-match interview, as quoted by Marca.

“The matches with the national team give me life. Here, I have the confidence of the coach.”

The win for Spain came on the back of a 1-1 draw with world champions Germany on Friday and means manager Julen Lopetegui has now led the 2010 World Cup winners to 18 games unbeaten as they continue their build up for Russia.

Isco is eager to show his best for Madrid but has reservations over getting the chance to shine under Zidane.

“I want to show that I’m a good player. Lopetegui shows me confidence with the minutes he gives me,” he added.

“Maybe I’m the problem in Madrid. I don’t know how to win Zidane’s confidence.”

Real Madrid are 5.50 to win a third successive Champions League title this season.