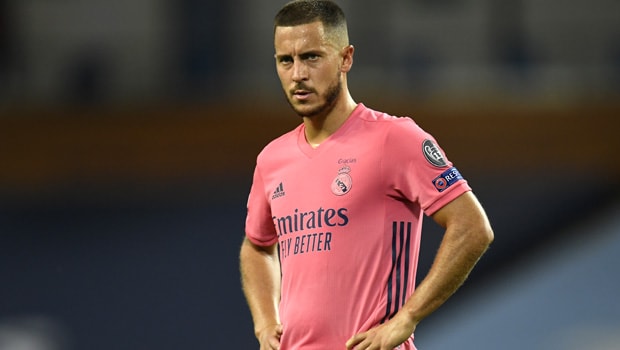 Belgian Forward Eden Hazard has been ruled out of Real Madrid’s UEFA Champions League tie against Shakhtar Donetsk on Tuesday in Ukraine.

According to a recent report from the Spanish giants’ official website, former Chelsea attacker will miss around 20 days of action.

Eden Hazard was substituted from the 2-1 loss against Alaves on Saturday after he appeared to have pulled a muscle in his right leg.

While his recovery will continue to be assessed, he will miss crucial games against Shakhtar Donetsk on Tuesday in the UEFA Champions League, Sevilla in the Spanish La Liga next weekend, Borrusia Monchengladbach, and Atletico de Madrid.

Hazard has only scored two goals for Real Madrid this season in 6 matches in all competitions.

The La Liga Champions have been inconsistent this season; they have lost two in their last five matches and won twice, including a draw.

Zinedine Zidane’s side is second in their UEFA Champions League group and has 7 points from 4 matches played, having lost the campaign’s opening game to Shakhtar Donetsk 3-2, a 2-2 draw with Borussia Monchengladbach, and a double win against Inter Milan.

Meanwhile, in the La Liga, Real Madrid has five wins, two draws, and three losses to sit fourth with 17 points, seven points behind Real Sociedad, who are atop the La Liga.

Tuesday’s Champions League opponents, Shakhtar Donetsk, have been inconsistent too, with two wins, two losses, and a draw in their last five matches in all competitions.

The Ukrainians are situated in 3rd with 4 points, two above Inter Milan who are rock bottom. However, on the home front, Shakther is second with 23 points, three behind Dynamo Kyiv, who are topping the Ukrainian league table.