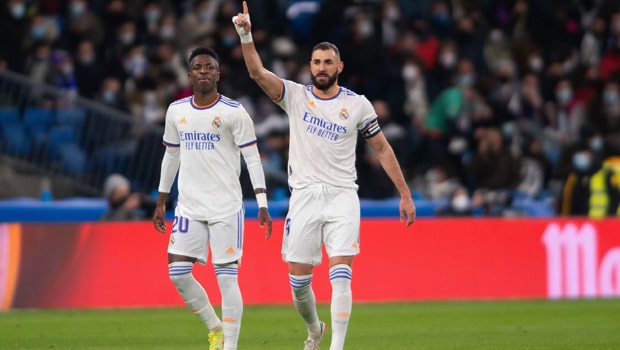 Karim Benzema and Vinicius Jnr both hit a brace each as Real Madrid thrashed Valencia 4-1 in a Spanish La Liga game played at the weekend.

The win put Real Madrid 8points ahead of Sevilla in second at the top of the La Liga table. The brace put Karim Benzema behind Cristiano Ronaldo, Raul, and Alfredo Di Stefano on the goalscorer chart for Real Madrid with 301 goals.

The French, after the game, expressed his feelings stating of his pride in reaching that milestone for the Low Blancos.

“I am very proud, Scoring that number of goals in this club makes me feel very happy. For me, this is the greatest club in the world. Today I thought we put in a great performance after the defeat against Getafe,” Benzema said.

Benzema opened the scoring just before half-time before Vinicius Jnr scored a quickfire brace in the second half before Benzema rounded up the scoring in the 88th minute, albeit Goncalo Guedes had pulled one back minutes before for Valencia.

Real Madrid is now 27 games unbeaten at home in La Liga with 8 points ahead of Sevilla in second. Meanwhile, Sevilla has two games in hand, including Sunday’s clash against Getafe.

Meanwhile, Barcelona were held to a 1-1 draw by Granada on Saturday on a night that Dani Alves returned to a competitive game for Barcelona since 2016 while also providing an assist.

De Jong scored for Barcelona in the 56th minute before Rodriguez Diaz scored late to hold Xavi’s side.

Meanwhile, Mikel Oyarzabal scored a 13th-minute strike to give Real Sociedad a 1-0 win over Celta Vigo, while Levante got a rare victory with a 2-0 win over Mallorca in a dramatic game that saw Mallorca miss a penalty and also had a goal disallowed by VAR.