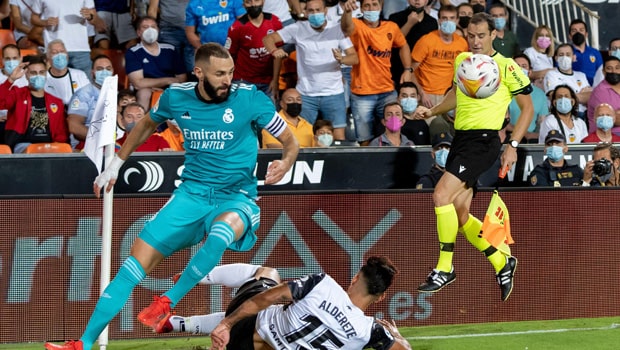 Real Madrid came from behind to beat Valencia on Sunday to secure all three points on a 2-1 win in the La Liga.

The win ensured that Real Madrid remained on top of the La Liga having started the game levelled on points with Valencia.

The game at the Mestalla was filled with injuries early on as Valencia withdrew Carlos Soler and Theirry Correira due to injury.

Real Madrid’s Dani Carvajal’s struggles with injury also continued as he was pulled off early due to an injury.

The Spanish defender was injured for most of last season which saw him miss the Euros and he also missed the start of the season before returning on August 22.

Cavarjal, who was just making his fifth appearance since his return from injury, lasted 25 minutes in the game beforehe was replaced by Lucas Vasquez after getting injured.

Meanwhile, Valencia led in the 66th minute of the game through Hugo Duro after Gabriel Paulista and Goncalo Guedes had missed scoring chances.

Valencia were close to claiming all three points until the 87th minute when Real scored two quick-fire goals.

After a couple of substitutions by Carlo Ancelotti which introduced Eduardo Camavinga and Rodrygo, Vinicius in inspired the come back.

First his shot was deflected in in the 86th minutes before he provided the assist for Karim Benzema’s winner just few minutes later.

It continues Real Madrid’s strength in finishing the game strongly after their 1-0 against Inter in the UEFA Champions League last midweek, which was only secured with less than five minutes to be played.

In other matches in the La Liga Sevilla secured a 0-0 draw against Real Sociedad as Mikel Oyazarbal lost a penalty on Sunday.

Meanwhile, Villarreal also played a 0-0 draw at Real Mallorca while Real Betis were held to a 2-2 draw by Espanyol.