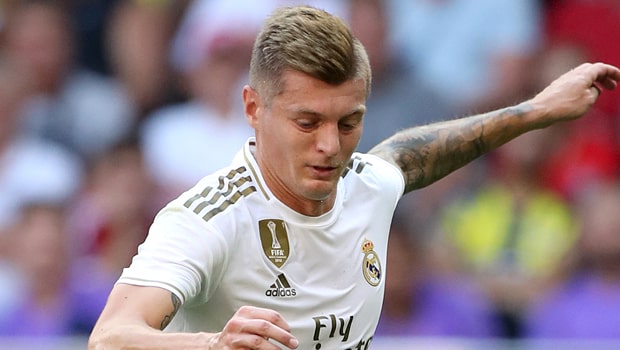 Madrid rivals Atletico Madrid and Real Madrid will face off on Sunday in the Final of the Spanish Super Copa going on in Saudi Arabia.

The fixture was confirmed on Thursday evening when Atletico Madrid came from behind to beat Barcelona in a thrilling encounter.

In the match played at the King Abdullah sports city in Jeddah, Atletico turned over a 2-1 deficit to win the game by 3-2 in 90 minutes, with all the five goals coming in the second 45 minutes.

The first half ended with little to discuss as relevant, but Atletico took the lead via a Koke’s strike from a Correa’s assist immediately after the restart.

It only lasted five minutes as Lionel Messi equalized with a great effort in the 51st minute only for Antoine Griezmann to give Barca the lead ten minutes later.

There was some sort of disappointment for Barca in the 75th minute when Pique thought he had put the game beyond Atletico with a tap in, only for VAR to rule it out for offside.

With ten minutes still to be played, the comeback session started as Alvaro Morata stepped up to score a penalty after Nero was penalized for a tackle on his opponent.

Just when it seemed as though everything was heading for a penalty shootout, Angel Correa grabbed the winner four minutes from time as Barca’s surge to find an equalizer late on proved abortive.

Meanwhile, Real Madrid on Wednesday had beaten Valencia by 3-1 to move into the final, which will be played on Sunday.

Toni Kroos scored a spectacular goal to open the scoring while Isco added another in the first half before Luka Modric scored one more in the 65th minute to take the game beyond Valencia, although Daniel Parejo got a late goal as a consolation for his side.

Real Madrid are fancied at 2.31 to win the Super Cup, while Atletico are backed at 3.39 to defeat Real Madrid.