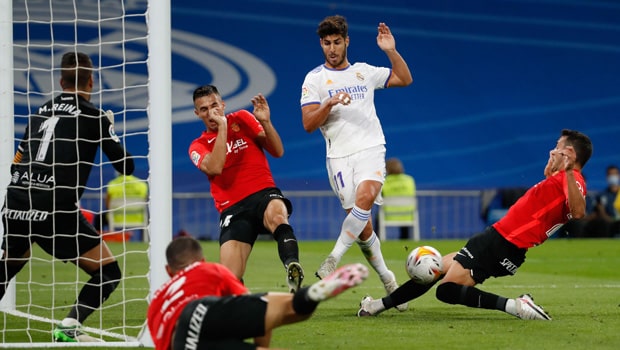 Karim Benzema scored a brace, but it was Marco Asensio who stole the show with a hat-trick in Real Madrid’s 6-1 win over Real Mallorca.

While Isco scored the final game of the game Benzema should have had his third of the game until VAR disallowed the game.

Real Madrid have two points more than Atletico Madrid at the top of the table and they host Villarreal at the weekend. The Los Blancos are currently the highest scoring side with 21 goals in six matches played and 8 conceded.

Papu Gomez and Rafa Mir’s sandwiched Toni Lato’s own goal in the first half as Sevilla beat Valencia early on Wednesday evening.

The win puts Sevilla one point ahead Valencia on the La Liga table with 11 points although with a game outstanding compared to Valencia who has ten points from six games.

While Valencia host Athletic Club next, it’s a travel to Espanyol for Sevilla. Espanyol had secured a 1-0 victory over Alaves on Wednesday afternoon as well.

The win is Unai Emery’s side first this season in all competitions, and they meant it right from the start of the game as Yeremi Pino scored the opener, while Manu Trigueros returned the home side to the lead after Johan Mojica equalised in the first half.

Alberto Moreno was a late replacement for Danjuma, but he had the time to get his goal as Villarreal dominated till the finish.

On Thursday, Granada will host Real Sociedad, while Osasuna will face Real Betis, and Barcelona will travel to Cadiz.

Barcelona are in 8th on the table with 8 points from 4 games played scoring 8 and conceding 5 goals.