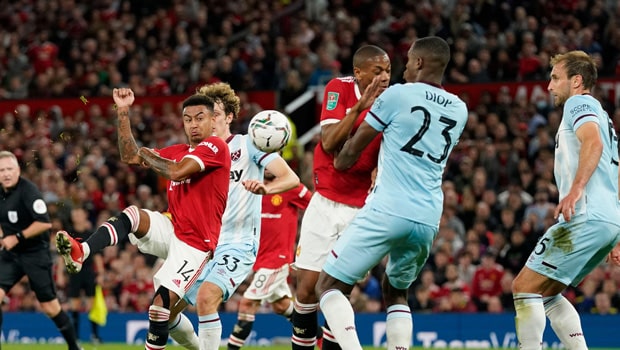 Manchester United were knocked out of the Carabao Cup on Wednesday evening at the Old Trafford as West Ham United had their revenge after weekend’s 2-1 loss at the Olympic Stadium.

Both side faced each other after their Premier League encounter which saw a dramatic end with Mark Noble losing a last minute penalty.

Ronaldo and Jesse Lingard’s goals had cancelled out Said Benrahma’s first half opener for the Hammer on Saturday.

However, there was no Ronaldo to equalise Manuel Lanzini’s 9th minute opener which proved to be the winner despite the presence of Jadon Sancho, Jesse Lingard and Anthony Martial.

West Ham skipper Mark Noble revealed he was sick as a pig after Sunday’s penalty miss but explained that he enjoyed Wednesday’s win at Old Trafford.

“We came to Old Trafford, one of the greatest places in the world, and thoroughly enjoyed it.” Noble said.

Nevertheless, Manchester United were followed out of the competition by Wolves, who lost on penalties to Spurs led by former Manager Nuno Espirito-Santo after a 2-2 draw in 90 minutes.

Timo Werner’s 54th minute strike was not enough on 90 minutes to see off Aston Villa but Thomas Tuchel’s side were efficient on penalties to progress into the next round of the competition.

Meanwhile, a first half brace from Aaron Conolly was all Brighton needed to dispatch Swansea City at the Amex Stadium.

Alexis Mac Allister provided both goals in the 33rd and 35th minute of the first half.

Ademola Lookman and Kelechi Iheanacho were on target in Leicester City’s 2-0 win against Millwall at The Den.

Alex Lacazzette, Emile Smith Rowe and Eddie Nkethia were on target as Arsenal beat League one side Wimbledon 3-0.

Meanwhile, the fourth round draws were concluded immediately after the games Arsenal will face Leeds while there is another all Premier League affair between Chelsea and Southampton as is West Ham facing holder Manchester City.

Leicester City and Brighton while Liverpool will face Preston, Burnley and Tottenham while Stoke face Brentford and Sunderland face QPR.