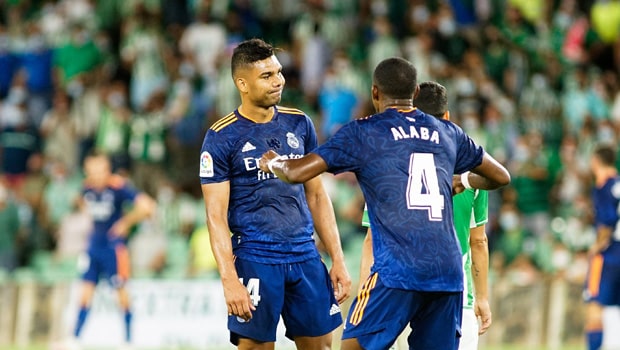 Real Madrid could be without David Alaba and Casemiro when they face Manchester City for the UEFA Champions League semifinal fixture on Tuesday.

The Los Blancos are sweating over the fitness of two of their biggest players this season. According to Carlo Ancellotti, both players have muscular issues but are still included in the traveling squad.

He made these revelations at the press conference ahead of their game with Pep Guardiola’s side.

“From what we saw yesterday in training, we have some doubts about Alaba and some more doubts about Casemiro; Training will tell us more. We have more confidence with Alaba with Casemiro.” Ancelotti said.

Real Madrid has a piece of positive news with the availability of Ferland Mendy, Mendy only returned to training on Monday, and his participation in the game is still relatively unknown.

The front line of Benzema and Vinicius Junior is expected to file out even though Benzema lost two spot-kicks in their 3-1 win over Osasuna.

The Los Blancos are one point away from being crowned the Champions of the La Liga, taking the crown from their city rivals Atletico, who won it last season but has been extremely inconsistent this season.

Real Madrid was not favored to go as far as the semifinals, especially after being paired with last season’s winners Chelsea.

The record winners of the competition secured a 3-1 win at Stamford Bridge before edging it out 5-4 on aggregate after a 3-2 loss at the Bernabeu in the second leg.

Against Pep Guardiola’s side, they are still slightly considered underdogs even though City faired past Atletico Madrid 1-0 aggregate over two legs.

Ancellotti is unfazed about the underdog tags sighting fellow La Liga side as a reason not to count Madrid out of the reckoning. The yellow submarines beat Bayern Munich 2-1 on aggregate to progress to the semifinals against all expectations.

Villarreal will face Liverpool in their own semifinal the following day.