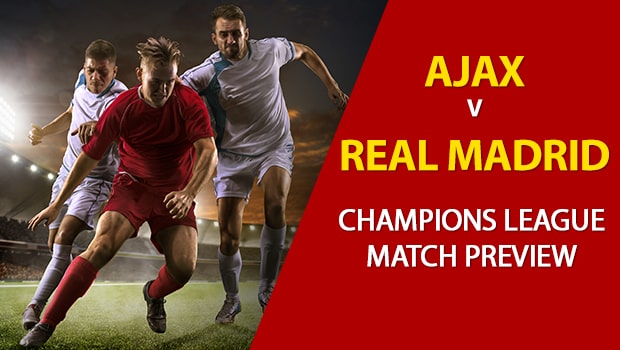 Real Madrid head to the legendary Johan Cruyff Arena for a Champions League matchup with Ajax in the first leg of their last-16 tie. Santiago Solari and Madrid have definitely had their ups and downs this seasons, but they enter Wednesday’s matchup in fine form.

Draw: There’s a 24.5 percent chance the match ends in a draw. There’s a draw in 25.6 percent of AccuScore sims, suggesting some added side value on the draw, but not much

Playing with Momentum: Madrid enters this match following a convincing 3-1 victory over rivals Atletico Madrid last Saturday. Ajax, on the other hand, enter the match following a 1-0 loss and just one win in four league games in 2019.

Potentially Making History: This is the first time Ajax is in the round of 16 since 2005-2006. They have never advanced past this point of the tournament.

Head to Head: These two sides have met just 12 times in the European Cup, with Madrid leading the series 7 wins to 4. Madrid is currently on a six-game win streak vs Ajax; Cristiano Ronaldo finished with a hat trick in the team’s last visit to Amsterdam back in 2012.

There’s not much extra side or added value in this matchup. AccuScore sims do give Ajax a slightly better chance at staying competitive than do offshore picks, but not enough to enough to earn a wager. If looking for the most value, Ajax +0.5 is the pick based off AccuScore sims.