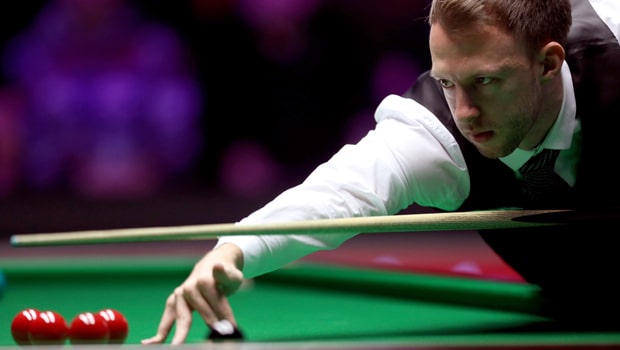 Already in the midst of his most prolific season on tour, Judd Trump now want back-to-back tournament wins to add to his CV.

The ‘Ace in the Pack’ landed the World Grand Prix in Cheltenham on Sunday evening, defeating Ali Carter 10-6 in the final, his third major win of the season after glory at the Northern Ireland Open and the Dafabet Masters.

He quickly turned his attention to the Welsh Open in Cardiff, easing past Harvey Chandler with a 4-0 whitewash in round one that included top breaks of 85 and 84 on Monday.

Trump has no doubts about attempting to win this week in Cardiff, though he is relieved to have some time off before round two.

“It was nice to get through so I can have a bit of time off before my next game,” said Trump “I have come here to try to win the event so I want to prepare properly.”

His three wins this season have started the process of elevating Trump onto the next level, where his natural talent has long since suggested he deserved to be. With his new-found confidence clearly showing, the Bristol potter isn’t about to hide the dreams he has for the rest of this term and beyond.

“There aren’t many players who win back-to-back events so I have to be realistic. It is draining mentally to be playing week in, week out, so I’m just going to try to enjoy this event and relax. “It’s a good time to be playing snooker because there is a tournament every week.

There are players who have won five ranking events in a season and that’s a goal I want to achieve within the next few years.

“My mentality at the moment is that I don’t want to drop a frame, so I’m trying my best to win every frame I play.”

Trump is 5.25 to win the Welsh Open this week, with Ronnie O’Sullivan favourite at 3.75 and world champion Mark Williams 13.00 to claim the Cardiff crown.