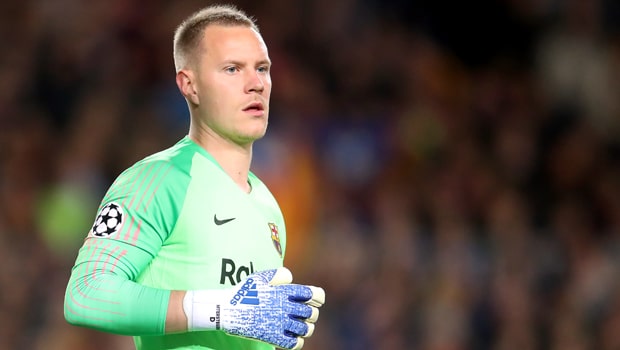 Marc-André ter Stegen made a spectacular penalty save from Marco Reus to deny Dortmund a win over Barcelona.

Barcelona shot-stopper proved to be the hero as he saved a penalty to give Barca a solo point from the match. In the group F game of the UEFA Champions League, Marco Reus had his penalty saved by his international teammate Ter Stegen which lead to a 0-0 draw.

Ter Stegen had a brilliant performance in Barcelona’s 0-0 draw against Borussia Dortmund in Germany as the Champions League commenced on Tuesday.

The goalkeeper made a great save to deny Marco Reus from close range early in the first half, then showed another master class by making an even better stop to deny his compatriot from the penalty spot during the second half.

The goalkeeper denied Marco Reus from close range in the first half and then produced an even better stop to deny his compatriot from the penalty spot after the break.

When Nélson Semedo made a strong challenge on Jadon Sancho in the penalty box, it looked like we’re going to have another bad away result.

But Ter Stegen did well to keep out Reus’ spot-kick, diving to his left and smartly parrying the ball.

As the ball went up into the air, Ter Stegen got back onto his feet and scooped it away from the onrushing Dortmund defenders. It was a composed and brilliant showing from the German, who for the last three years has been a colossal presence at the goal post for the Catalans.

Earlier in the first half, he positioned himself expertly to block Reus’ strike after Thorgan Hazard played the ball to the playmaker.

When Ter Stegen was beaten by Julian Brandt, the woodwork came to the rescue, with the midfielder’s ferocious strike hitting the crossbar.

The German star made several important saves to deny Borussia Dortmund a win in Germany. It was as emphatic performance.

In the other group game, Inter had summer signing Nicolò Barella to thank for securing them a point against Slavia Praha, as his injury-time goal gave them a 1-1 draw for Antonio Conte’s men at San Siro.