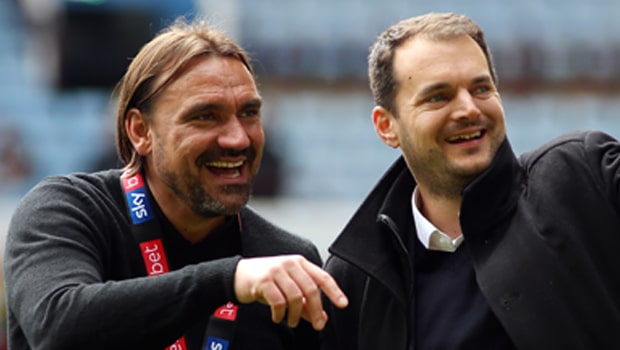 Stuart Webber, Norwich City sporting director will be putting pen to paper this week in another huge boost for last term’s Championship winner.

The sporting director who has been one of the key men for the Premiership side will be signing a new contract. Webber has already overseen a huge transformation at the club over the past two years and will be committing his future to the Canaries after signing a three-year deal, according to a report by The Telegraph.

Webber, 35, played a vital part of the appointment of head coach Daniel Farke in May 2017 and has played a significant role in the club’s recruitment processes and in addition, the development of the burgeoning academy.

The 35-year-old who had pitched his tent with Liverpool, Wolves and Huddersfield in times past is highly regarded in the footballing circle. Indeed, he has also been considered for a senior role in a number of clubs in England’s top-flight.

Webber will now put pen to paper only a few days after their shock win over two-time reigning champions Manchester City.

The Canaries had their wage bill put at £63million a year when Webber was appointed in April 2017. That figure was second only to Newcastle United in the Championship.

The Canaries’ Sporting director who has worked in tandem with the recruitment team has masterminded the signing of stars like Teemu Pukki, Emi Buendía, Onel Hernández and Marco Stiepermann.

It was the pair of Pukki and Emi Buendía who led the onslaught of Manchester City on home turf. Finnish striker Pukki has been exceptional this term scoring even against the Big Six sides.

It was for these mind-blowing performances that he lifted the August player of the month award.

Emiliano Buendía, on the other hand, has formed a good partnership with Todd Cantwell and ultimately the right supply to the lone striker Teemu Pukki.

Norwich City are 2.25 to finish as the best promoted team in the Premier League, while Aston Villa are fancied at 2.50.