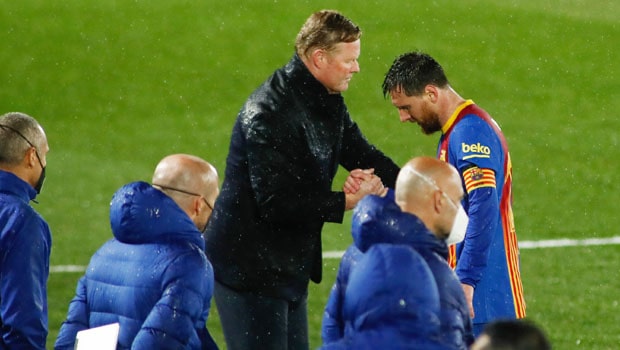 Barcelona secured a pulsating 3-2 victory over Valencia at the Mestalla on Sunday evening. While Real Madrid and Athletico Madrid both won on Saturday, as the race for the La Liga crown gets hotter.

Having seen both Madrid sides win their games on Saturday with Atletico beating Elche 1-0 and Real Madrid beating Osasuna 2-0, Barcelona needed to win their game to secure three points and stay in touch with the two rivals in the title race.

The first half started with both sides going into the break level but the game sprung into life immediately after the break as Valencia took the lead five minutes after the breakthrough defender Gabriel Paulista.

However, Ronald Koeman’s side equalized in the 57th minute through Lionel Messi who initially missed a spot-kick but scored from the rebound.

Antoine Griezmann gave the Blaugrana the lead in the 63rd minute before Messi got his brace six minutes later.

Carlos Soler scored in the 88th minute to give Valencia hopes of securing a point from the game but it was too little too late.

Meanwhile, Real Madrid left it late on Saturday evening as an Eder Militao and Casemiro scored in the 76th and 80th minute to give Real Madrid a 2-0 victory over Osasuna at the Alfredo di Stefano stadium to stay in touch in the La Liga title race.

Real Madrid started the weekend in second place with 71 points before the game and 5 points behind Atletico Madrid at the top of the table.

Real Madrid needed to win to stay in touch with the league leaders who defeated Elche away from home 1-0 to extend the two-point lead to five.

Away at Elche, Diego Simeone’s men had to secure a hard-fought 1-0 victory on Saturday afternoon.

Atletico Madrid side took the lead in the first half through Marcos Llorente in the 23rd minute, seven minutes after Luis Suarez had his goal disallowed by the VAR

Atletico Madrid remains at the top of the table with 77 points while Real Madrid and Barca are second and third respectively with 75 points on the La Liga table.