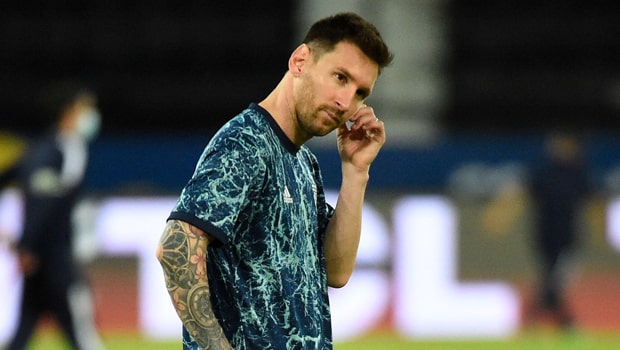 Newly-crowned Copa America champion with Argentina, Lionel Messi has finally sorted his contract situation at Barcelona after agreeing to a new five-year deal with the Camp Nou side.

The new deal will see Messi stay at Barcelona until 2026 but on a reduced wage bill which will see him earn half of what he used to.

However, the official announcement of his deal will hinge on the departure of more players from Barcelona as they continue to prune down their wage bill to accommodate Messi’s.

The 34-year-old earns £123m a season with his contract expiring at the end of June while he was away with the Argentina national team at the Copa America.

Already, Barcelona has sold some fringe players this summer to free the wage bill, the players who have exited the Camp Nou include Junior Firpo, Jean-Clair Todibo, and Carles Alena.

Messi who has scored 672 goals for Barcelona, winning 10 La Liga titles, four Champions Leagues, seven Copa del Reys as well as claiming the Ballon d’Or on a record six occasions, was previously linked with a move away to French side PSG, Manchester City, and the MLS.

Messi won his first international title with Argentina at the just-concluded Copa America which was held in Brazil this summer.

The 34-year-old forward has won the FIFA under-20 World Cup and the Olympics gold medal with the national youth teams but has never won a major trophy with the senior side.

Argentina defeated Brazil 1-0 in the final at the Maracana Stadium.