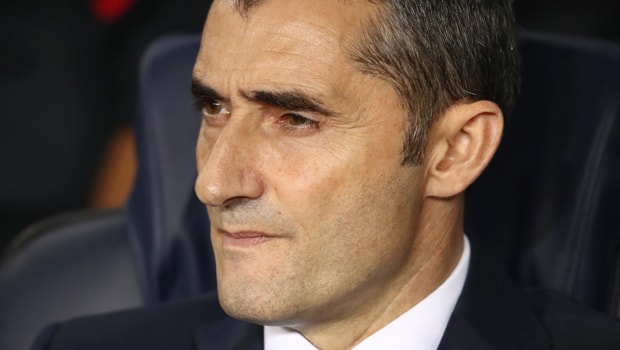 Barcelona boss Ernesto Valverde has praised his side’s attacking quality after they demolished Huesca 8-2 in La Liga on Sunday.

Lionel Messi and Luis Suarez both grabbed braces for the Blaugrana, while Ivan Rakitic, Ousmane Dembele and Jordi Alba were also on the scoresheet at Camp Nou.

Newly-promoted Huesca actually took the lead in just the third minute of the contest through Cucho Hernandez, while they reduced the arrears to 3-2 on the stroke of half-time thanks to a goal from Alex Gallar.

However, Barca ran riot in the second-half, netting five unanswered goals and Valverde was quick to praise the attacking prowess his side showed as they maintained their 100% start to the new season.

“We did a lot in attack, we scored eight goals, we played well and created a lot of chances. It’s a good day, Huesca are a tough opponent,” Valverde told reporters.

The reigning La Liga champions have moved to the top of the early-season standings following Sunday’s victory, although they are only above rivals Real Madrid on goal difference and Valverde knows it is too early to be paying attention to the league table.

“I don’t give a lot of importance to being top of the table now because of goal difference. There are a lot of matchdays to come.

“Atletico [Madrid] and Valencia dropped some points but the league just started. Obviously we have to choose always to be on top.”

Barca are priced at 1.67 to go on and win the La Liga title for the fourth time in five seasons.