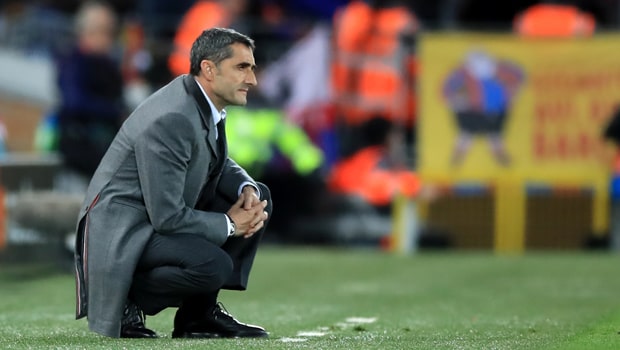 The club could complete a domestic double in the next week or so but it is their disappointments in Europe that have led to speculation about Valverde’s future in the job.

During his two seasons at the Nou Camp, Barcelona have lost to Roma in the quarter-finals of the tournament after a 4-1 first-leg victory and then this year blew a 3-0 first-leg lead to lose to Liverpool in the semi-finals. That is in contrast to their success domestically.

They already have the La Liga title sewn up, having an 11-point lead going into the final weekend of the season, and then, next Saturday, they face Valencia in the final of the Copa del Rey.

If they succeed it would complete back-to-back domestic doubles and president Bartomeu says they are planning for the future with Valverde staying in charge. He told the club’s website: “He is the coach we want, he is under contract and we are very happy with him.

“Planning for next season has been under way for some time. Some players have already been signed and we’ll talk further after the Copa del Rey final.

“Our main objective is La Liga and, after that, we want the Copa del Rey and the Champions League.”

Barca’s last Champions League success was back in 2015 when they beat Juventus in the final and their last La Liga match of the season is away to Eibar on Sunday. Meanwhile, Philippe Coutinho is a doubt for the Copa del Rey final after he injured his hamstring in his team’s victory over Getafe last weekend.

Barcelona are priced at 1.53 to win this year’s Copa del Rey with Valencia 5.25. Valencia meanwhile are 1.30 to secure a top-four finish in La Liga with Getafe 3.50.