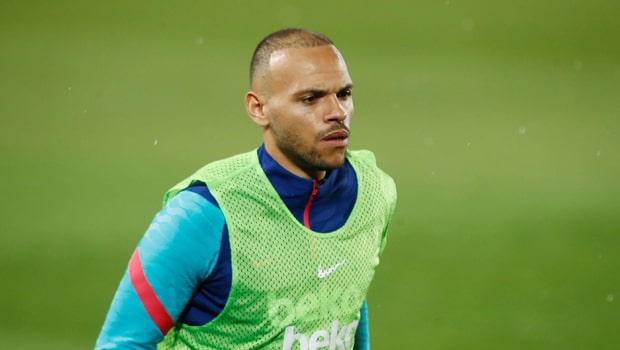 Denmark striker Martin Braithwaite has stated his interest in staying back at the Camp Nou for the nearest future despite interests coming from the Premier League and Barcelona’s wish to offload the Dane.

The Denmark striker was with the Denmark national team as they got to the semi-finals of the competition where they lost to England.

However, he has not particularly impressed at the Camp Nou since joining Barcelona in the 2019/2020 season but he has just scored three goals in 40 La Liga games across two seasons.

Meanwhile, West Ham United is interested in bringing in the forward as they prepare to play in Europe this season after an impressive Premier League campaign last season.

Fellow Premier League sides Brighton and Norwich City are also said to be interested in signing the forward.

Braithwaite is contracted to Barcelona until 2024 but it is reported that he is included in the transfer list as Barcelona continues to trim down their squad to balance the wage bill.

While Barcelona does not have a loaded forward line, they brought in Argentina forward Sergio Aguero from Manchester City on a free transfer.

Furthermore, they have also agreed to a contract renewal for Lionel Messi until 2026 although the details will only be released when they sort their wage bill.

Aguero is also joined by Dutch forward Memphis Depay who is also joining on a free transfer from Ligue 1 side Lyon.

Barcelona President Joan Laporte had made it imperative to secure the services of Lionel Messi after getting elected in January.