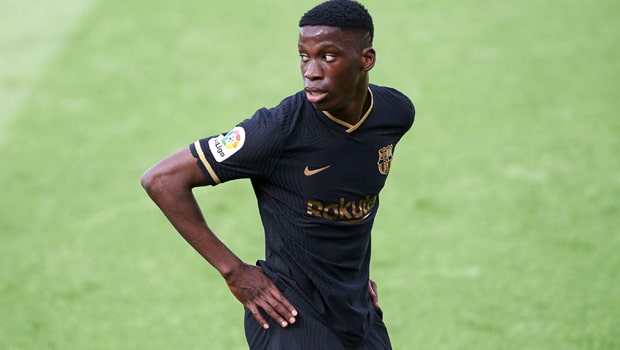 Barcelona midfielder Ilaix Moriba could complete a move to German Bundesliga side RB Leipzig in the coming hours.

Reports on Monday indicated that the Bundesliga side have reached an agreement with Barcelona for a fee worth €20 million.

The duration of the contract is for five years and the player is expected to fly to Germany on Tuesday ahead of a medical.

Moriba whose contract with Barcelona expires in 2022, couldn’t agree to an extension with the Camp Nou side.

He had signed a three-year contract in 2019 worth €1m but recent contract negotiations have been unsuccessful with Barcelona reluctant to give in to Moriba’s agent’s demands.

The teenager has been shut out of the main team but this hasn’t made him short of suitors with premier league clubs including Manchester City, Real Madrid and Chelsea interested in his services.

Moriba made 18 appearances in his first season at the club’s senior team last season.

Bundesliga side RB Leipzig now seems to have taken fore front in the deal especially as their skipper Marcel Sabitzer moved p Bayern Munich over the weekend.

Meanwhile, Barcelona has had a decent start to the season with two wins and a draw from three games.

The Catalonia side defeated Getafe 2-1 with one of the summer signings Memphis Depay shining with his third goal contribution in his third game at the club.

Barcelona has been forced to sell some of its players this summer due to a La Liga wage bill regulation.

Notable of the departures from Camp Nou this summer is Lionel Mesis who left for PSG and has since made his French Ligue 1 debut at the weekend.