Barcelona’s Misery Continues As they Draw with Osasuna 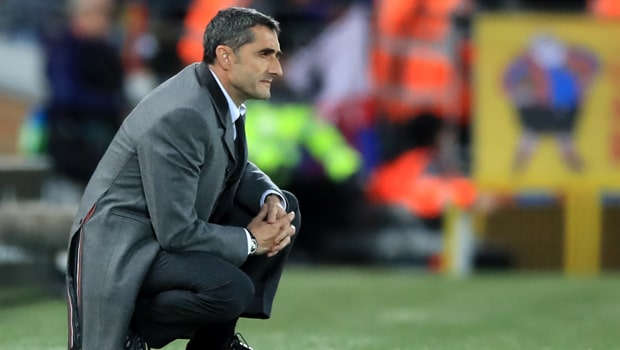 The newly-promoted side, Osasuna forced Barcelona to a late lead slip as they secured a point with the Spanish giant at Estadio El Sadar.

The hosts stunned the Catalona side by breaking the deadlock in a little over seven minutes, when winger,  Brendan Thomas evaded Clement Lenglet before heading the ball across to fellow striker, Roberto Torres, who was unmarked, the striker rifled a rattling volley past a helpless Marc-Andre ter Stegen.

Ernesto Valverde’s men proceeded to dominate possession and dictate play from deep as usual, yet they rarely made any serious attempt as Osasuna took their lead to the half-time with their 1 – 0 lead still intact. In the early parts of the game, Los Rojillos seemed likely to grab the game’s second goal, offering an aerial threat at corners.

Lionel Messi’s calf injury has seen him missed Barcelona’s first three matches of the 2019/20 season.  The team once again looked poor, ordinary, and lacking in ideas without their mercurial captain in Pamplona.

As Barcelona’s players found it difficult to break down a resolute Osasuna backline, Ansu Fati, the 16-year-old substitute scored a great goal for Barcelona. Having been brought on at the break, the winger made an immediate impact as he redirected Carles Perez’s cross into the back of the net.

With less than an hour to go, the comeback was completed as Arthur Melo – who had also been brought on as a substitute at the break – struck wonderful curling shot out of the reach of Ruben in the Osasuna goal.

Barcelona looked sure to wrap up the win from that position. However, they had to settle for a single point when Gerard Pique blocked a shot with his hand in the penalty area. Osasuna number 10, Torres. Grabbed a brace by converting the resultant spot-kick.

Without Messi in the team, Barça looks very ordinary and poor. The Argentine is supposed to return after next week’s international break because his teammates have been exposed in his absence.

These results have clearly shown how over-dependent Barcelona have been on Messi. Despite all the number of top players in their team, the Catalan giants are largely dependent on one player, even when that man happens to be a five-time Ballon d’Or winner. If the 32-year-old’s injury struggles continue into the autumn, an early exit from the Champions League would not be too surprising football followers across the globe.