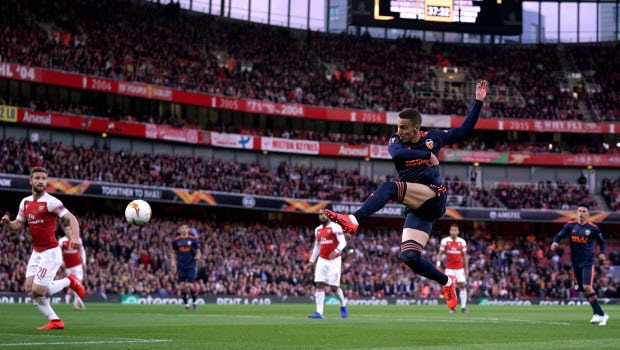 FC Barcelona, in a bid to fill the void to be left behind due to the injury of Uruguayan striker Luis Suarez, has identified Valencia striker, Rodrigo Moreno as a transfer target, this is according to Spanish media outlet Marca.

It is expected that the Spaniard will fit into the style of newly appointed manager, Quique Setien’s tactics.

Rodrigo is valued at €60m by Valencia, and this may be a big hindrance to the striker’s move to the Camp Nou.

Meanwhile, Barcelona may find it hard to get a top striker in the January transfer window and as such be forced to pay a high price for any available forward including Rodrigo himself.

Rodrigo has been instrumental for Valencia this season scoring four times, but his ten assists across twenty-two appearances in all competitions have revealed him as a selfless striker whose addition will bring the best out of the rest of Barcelona forwards including French man Antoine Griezmann, Lionel Messi and Ousmane Dembele.

Barcelona has been involved in a neck to neck title race in the La Liga with capital Club, Real Madrid who sit second on the log only due to inferior goals difference as they have the same point with the Catalonia club.

Both Real Madrid and FC Barcelona have 43 points from 20 games, but while Barca has scored 50 and conceded 23, Madrid has only managed 38 goals and conceded 13.

Last weekend, Barcelona beat Granada at the Camp Nou 1-0 courtesy of a lone strike from Lionel Messi while Madrid saw off Sevilla in a 2-1 victory at the Santiago Bernabeu.

Casemiro scored a brace, a goal each in each half and on either side of Luuk De Jong’s goal. They will face Unionistas on Wednesday in the Cop Del Rey while Barcelona will be guest to UD Ibiza Eivissa as well.

Barcelona are backed at 1.16 to defeat UD Ibiza, while Ibiza are priced at 16.37 to pull off a shock win.