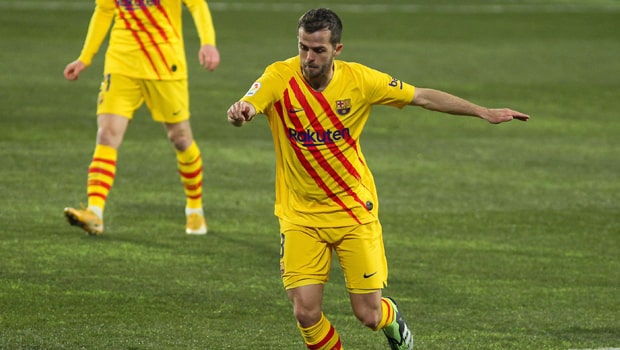 Miralem Pjanic and Samuel Umtiti may be forced to exit Barcelona this summer as the Blaugrana continue to balance their wage bill.

According to the team manager of the side Ronald Koeman, both players do not fit into his plans for the new season.

Pjanic played just 13 La Liga matches with just six of them being starts despite moving to Barcelona from Italian giants Juventus last summer for €60 million.

Unfortunately, both players have time still left on their contracts with Pjanic having three seasons left while Umtiti has a contract running for another two years.

Releasing both players will cost an already cash-strapped Barcelona a huge amount in paying them off the salary of their remaining contract.

However, a compensation package will be negotiated with the players which will be financially easier for the club to navigate than paying the players their full salary for what’s left of their contract.

Meanwhile, Barcelona has continued to release players in a bid to shed wage bills after been badly hit by the Covid-19 pandemic.

Winger Francisco Trincao left Camp Nou to join Premier League side Wolves on a season-long loan with an option to buy.

Junior Firpo is close to joining Leeds United in the Premier League while Konrad de la Fuente has moved to the French Ligue 1 to join Marseille.

Nevertheless, it hasn’t stopped Barcelona from reinforcing their team with Sergio Aguero joining from Manchester City on a free transfer while Eric Garcia and Memphis Depay have also joined the team.