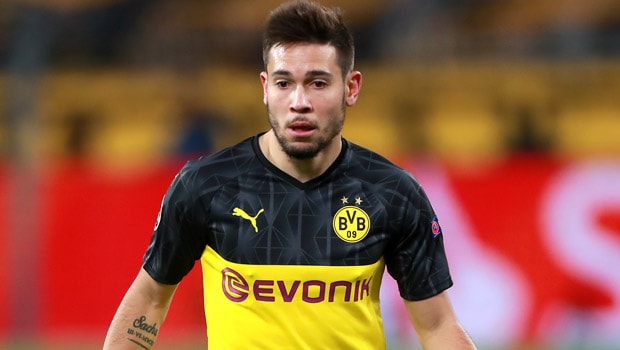 Spanish La Liga side FC Barcelona are reportedly interested in 25 million pounds rated full-back Raphael Guerreiro. The Borussia Dortmund player will be available in the summer.

Raphael Guerreiro joined Borussia Dortmund from French Ligue 1 side Lorient in 2016 albeit the Catalunya side had shown interest In him before the move.

The La Liga side is planning on reinforcing the left-back position as Jordi Alba reaches the tail of his career while youngster Junior Firpo is failing to impress in the main team and looking likely to leave the Camp Nou in the summer.

However, the deal could be affected by a Potential signing of Brazilian forward Neymar who they see as the perfect reinforcement for the striking position same as Inter Milan forward Lautaro Martinez.

It is said that the excess money left after the signature of both players would be used to secure the left-back from the German side.

Guerreiro’s goals contribution for the Bundesliga side is pretty impressive as well as he has been involved in ten goals from 29 games played in all competitions this season.

He is a natural left wing-back, the Portugal international can adjust to a full-back role and can also function in the midfield centrally or wide.

Raphael Guerreiro, born in December 1993, started his career with French side Caen in 2012 making 38 appearances for the team before leaving in 2013 when he joined Lorient.

At Lorient, he played over 100 games scoring ten goals in 3 years before he joined Borussia Dortmund in 2016.

For the Portuguese national team, he made his debut in 2014, and he was part of the team that won the European championships in 2016 in France before winning the UEFA Nations League three years later.