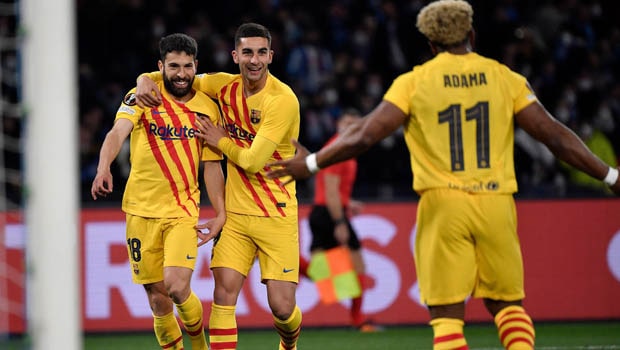 Barcelona on Thursday evening moved into the next round of the UEFA Europa League after beating Napoli 4-2 in Naples to win 5-3 on aggregate.

The Camp Nou side was wasteful in their first leg in Spain, with Ferran Torres, the culprit even though he scored their only goal of the game in the tie.

However, the former Manchester City star atoned for his misdeeds in the first leg after providing the assist for Frankie De Jong’s goal for Barcelona’s second in the 13th minute.

The Catalonians took the lead five minutes earlier through Jordi Alba while Gerard Pique made it 3-1 on the dot of half-time. The defender’s goal came after Napoli had pulled one back from the spot through Lorenzo Insigne in the 23rd. The penalty was awarded after Nigeria forward Victor Osimhen was brought down in the box.

The tie sealing goal came from former Arsenal forward Pierre Emerick Aubameyang just before the hour mark. The goal was his fourth in two matches after scoring a hattrick in Barcelona’s last La Liga game in a 4-1 win over Valencia.

Meanwhile, despite a goalless draw between Real Betis and Zenit St Petersburg, the La Liga side moved into the next round of the UEFA Europa League after a 3-2 victory on aggregate from the first leg.

Unfortunately, Real Sociedad was knocked out of the competition by RB Leipzig after a 3-1 loss on the night and a 5-3 win on aggregate.

Portuguese side SC Braga ended Sheriff Tiraspol’s run in Europe with a 2-0 win on the night, meaning a penalty shootout was needed to separate both sides after a 2-2 aggregate scoreline with Braga triumphing.

Meanwhile, Dortmund was knocked out by Glasgow Rangers after a 2-2 draw in Scotland meant that the German had to rue their first leg 4-2 loss which meant a 6-4 aggregate victory for Rangers.