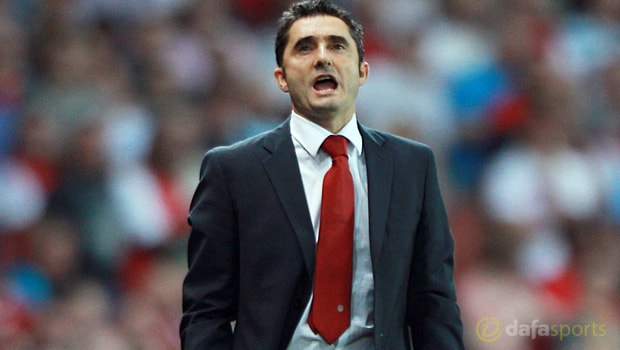 Barcelona boss Ernesto Valverde believes Manchester United have the quality to challenge for both Premier League and Champions League glory this season.

The 53-year-old was speaking after Barca’s 1-0 victory over United in the International Champions Cup on Thursday, a result sealed by Neymar’s first-half strike.

Despite the result, Valverde is convinced the Red Devils, who won last season’s Europa League, will be a force to be reckoned with, both domestically and in Europe this term.

“This year they are going to be in the Champions League. Their presence by itself is impressive. They impress.

I think they are going to be a really hard team to beat,” Valverde said.

“For me, they are contenders to win and they are going to be hard to beat in the Premier League and the Champions League.”

The former Athletic Bilbao coach, who took over the reins at Barcelona earlier in the summer, is keen to avoid United in Europe this season.

“I wouldn’t want to face them in the Champions League,” he added.

Despite his respect for the Red Devils, Valverde was pleased with his own side’s performance in Washington as Barca maintained their 100 per cent record in pre-season.

He added: “Concerning the game, I am happy with the performance and I am happy that we won against a powerful team such as Manchester United.”

The Blaugrana will be looking to regain the La Liga title from Real Madrid this season and they are priced at 1.95 to achieve that feat.