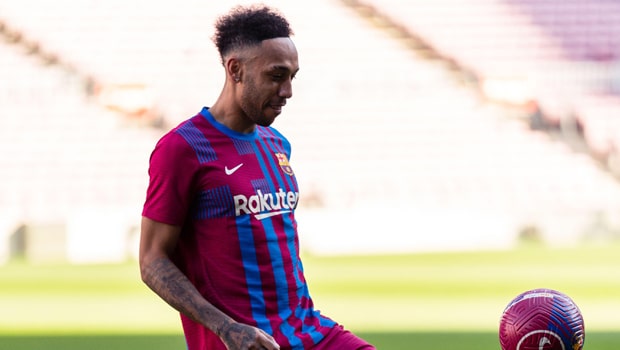 Gabonese striker Pierre Emerick Aubameyang has revealed a tiny instance of the situation at the Emirates stadium, which surrounded his move out to La Liga club Barcelona.

Aubameyang fell out of favor at Arsenal just before the AFCON tournament as he was stripped of the Arsenal captaincy following a disciplinary breach.

This led him to be frozen out of the team by Mikel Arteta and the former Borussia Dortmund striker revealed that his issues with Arteta contributed to his decision to leave the club.

“It’s true that they were complicated months and I think football has these things sometimes, But if I have to say something about this topic [leaving Arsenal], it is that I never wanted to do anything wrong on my part, but I think this is the past and I want to think about the present.” Aubameyang revealed.

Subsequently, the striker flew to Spain despite not having a deal yet to be agreed by both clubs, and though there were delays, a free transfer was completed before the window slammed shut.

The forward, who joined Arsenal from Dortmund in 2018 in a £56m transfer made 163 appearances while scoring 92 times for the Gunners, stated that he is mentally ready for the task at the Camp Nou with Barcelona.

He signed a three-contract with the Catalonia side till 2025 with a buyout clause worth £83.4M and an option to leave the club in 2023.

Pierre Emerick Aubameyang won the FA Cup in 2020 which was Arteta’s first silverware in his first season as the team’s coach.

Meanwhile, Aubameyang has also said that he is committed to turning the fortunes of the club by returning them to the UEFA Champions League. Barcelona were knocked out in the group stages after failing to get past Bayern Munich, Benfica, and Dynamo Kyiv.

Barcelona have endured a poor season by their standard, having needed to sack Ronald Koeman to bring in Xavi.