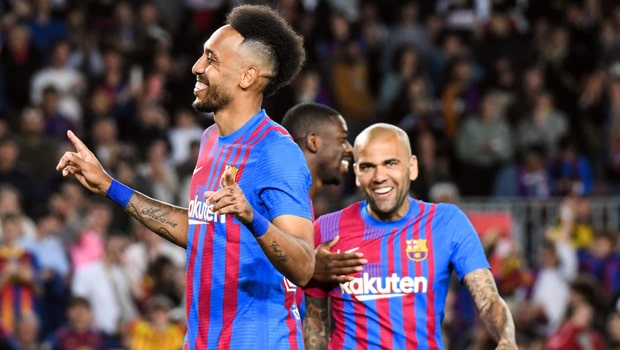 Pierre Emerick Aubameyang was on target on Wednesday when Barcelona were held to a 1-1 draw by Tercera División RFEF – Group 5 side Unió Esportiva Olot.

The game was Barcelona’s first pre-season game, and manager Xavi Hernandez fielded a mix of first-teamers and youngsters.

There was a starting debut for Ivorian midfielder Franck Kessie who joined the club from AC Milan. Nico Gonzalez and Pablo Torre Carral also had a starter’s shirt.

Aubameyang was flanked upfront by Ilias Akhomach and Abde Ezzalzouli, both youngsters among the other seven from Team B.

Pierre-Emerick Aubameyang gave Barcelona the lead in the 28th minute of the first half, but Olot equalized just before halftime.

The word series of substitutions in the second half but most notably and so far, it went out again and the captain’s armband for the rest of the game.

However, there was no chance for a debut for former Chelsea defender Andreas Christensen who joined Barcelona on a free transfer.

Meanwhile, the club has finally reached an agreement with Leeds United for forward Raphinha is set to join Barcelona. The move will cost Barcelona 58m euros for the 25-year-old Brazil playmaker.

Raphinha was initially a subject of interest for Arsenal before Chelsea placed a bid above 60 million pounds to lure the player to Stamford Bridge.

However, his desired destination has always been Barcelona since months ago.

Raphinha joined Leeds United from Stade Rennes in 2020, and he has managed 65 Premier League games, scoring 17 goals and providing 12 assists.

The player has already traveled to Barcelona and will have his medical in the coming days. He will be Barcelona’s third signing of the summer.