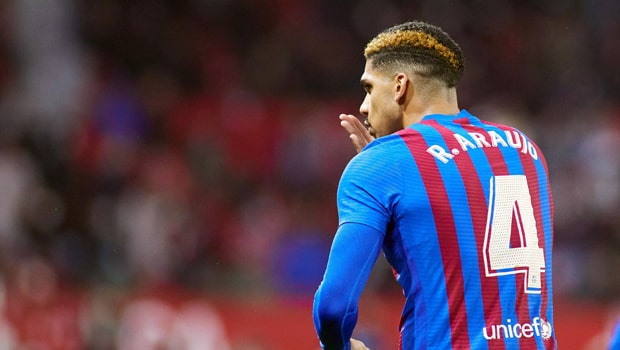 Uruguayan defender Ronald Araujo has demanded an increase in his salary at Camp Nou after an impressive start to the season.

Araujo joined Barcelona three years ago, but he has grown to be a regular starter and has been one of the few shining lights for Barcelona in a largely disappointing 2021/2022 season across the board.

Araujo has featured in 58 matches for Barça, finding the back of the net four times in the process as well. He is believed to be one of the future leaders at camp Nou. Barcelona have already opened contract extension talks with the 22-year-old.

Araujo has just 18 months left on his contract but already wants an improved salary before a new deal is agreed. The former Boston River player is already on the radar of Chelsea, Manchester United, and Liverpool.

However, it is understood that he would want to remain at the Camp Nou if his wages could be improved as he is one of the lowest-earning defenders at the club.

It is left to be seen how Barcelona will work out his salary with the club experiencing poor financial situations lately.

Barcelona have had a poor start to the season, winning just one out of their last five games.

Xavi Hernandez’s side have also been knocked out of the UEFA Champions League after finishing in the group behind Bayern Munich and Benfica.

The team will also be in search of a striker after the premature retirement of Sergio Aguero, who was forced to retire after suffering from a heart problem.

Barcelona have been linked with Manchester City striker Ferran Torres who reports claim has agreed to join the Camp Nou side.

Barcelona are also interested in out of favour arsenal striker Pierre Emerick Aubameyang. However, his wage demand could be the only stumbling block in the way of a move.