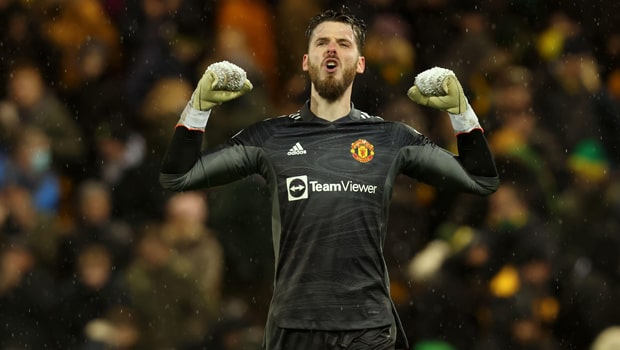 Manchester United goalkeeper David de Gea has revealed that every training session under new manager Ralf Rangnick is very intense. The German manager is known to get the best out of his players and has done a good job since he has taken charge of the club.

De Gea is happy that the team has returned back to training after the coronavirus outbreak in the squad. Manchester United will now look to once again hit the ground running after the forced break.

Speaking to the club’s official media, De Gea said: “It’s great. It’s good to have the whole team back to train properly altogether and then of course see they are all safe. They are back, they are all training, they are fine so it’s great to be together again.”

Rangnick has been pushing the players to give their 120% on the pitch in the training sessions and the results are palpable in the matches.

De Gea added: “We’ve been training hard, of course. It’s very intense, every training session, every moment with him [Rangnick] is intense. You have to give 100 per cent every time in training and in the games. Let’s see. It’s just the beginning, it’s been a couple of weeks, so let’s see in the future. The team is training with energy, with pace, and now we have to show that in big games.”

Meanwhile, Manchester United has performed well under the tutelage of Ralf Rangnick. The players are pressing more than what they were doing in the past and the results have also gone their way.

The Red Devils had shared the spoils with Young Boys in their last group stage match of the Champions League, which was the team’s first match under Ralf Rangnick. Subsequently, Manchester United defeated Crystal Palace and Norwich City by a margin of 1-0. Thus, they have been unbeaten under Ralf Rangnick so far.

Manchester United will next face Newcastle United on Monday at St. James Park.