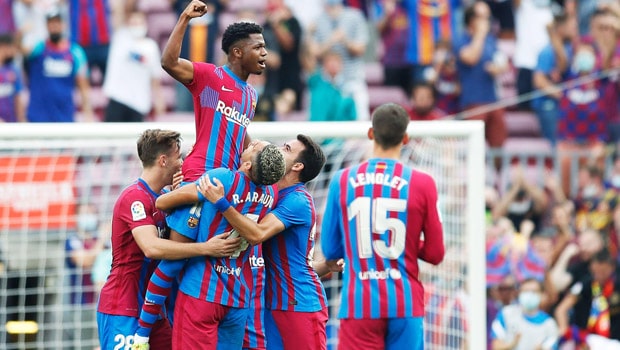 Barca youngster Ansu Fati made a scoring return from his lengthy injury lay-off on an emotional day for the 18-year old, as Barcelona beat Levante 2-0 on Sunday at the Camp Nou.

The 18-year-old suffered a torn meniscus on his left knee in a clash with Real Betis last November, but he made the most of his ten minutes by scoring Barcelona’s third on the night.

Barcelona were winless in their last three games in all competitions, having lost to Bayern Munich in the UEFA Champions League followed by two draws in the La Liga against Cadiz and Granada.

Despite not having Ronald Koeman on the sidelines after his Red card against Cadiz, Barcelona went into the lead as early as the sixth minute through a Memphis Depay penalty.

Luke De Jong perfectly slotted past the goalkeeper 8 minutes later from a Sergino Dest through ball.

While Levante pushed for goals in the second half, goalkeeper Ter Stegen was up to the task on all occasions.

Fati was introduced with ten minutes left to play, and Barcelona’s new number 10 was sleek as he ran through before taking a shot, which went through Levante’s defenders legs and beat the goalkeeper.

The midfielder shared his feelings after the game and expressed his delight at the goal and warm reception after a tough ten months.

“I did not imagine a return like this. Here you always have to win. I am happy for the victory, we have a lot left. I thank the doctors and physios who have been with me. Also to the fans.” Fati said.

Fati will hope to make the starting line up on Wednesday when Barcelona travel to Portugal to face Benfica in what will be his first UEFA Champions League fixture in close to a year.

The result puts Barcelona in sixth with 12 points from 6 games, five behind Real Madrid at the top of the table.