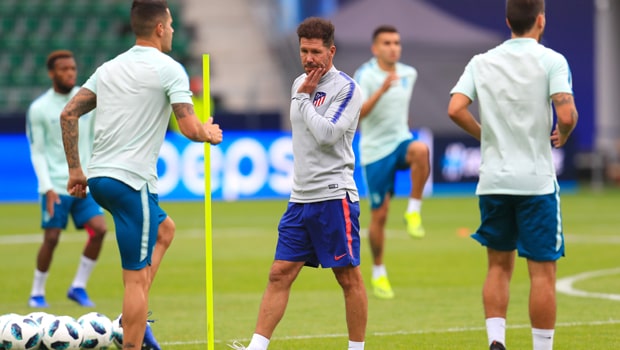 Diego Simeone has ended speculation on his future by saying he is to stay with Atletico Madrid and rebuild the squad if players leave.

Antoine Griezmann has already said that he wants to depart in the summer despite having signed a new contract last year. He is set to be one of a number of players leaving the Wanda Metropolitano in the coming weeks.

Juanfran, Diego Godin and Filipe Luis are expected to leave on free transfers while others who could also move on include Vitolo, Santiago Arias, Thomas Partey, Rodri and Saul Niguez. With what is expected to be a summer of upheaval at the club, there had been speculation that Simeone himself may look to engineer a move away.

However, he has put those rumours to bed, saying that he wants to stay and improve the squad for next season. After a friendly with Beitar Jerusalem on Tuesday, the Atletico boss said: “I like my job, I feel very identified and committed to the club.

“I know that year on year it’s always more difficult and that makes us see our real selves and generate enthusiasm.

“Next season there will be football players who will arrive with great enthusiasm and hopefully adapt to the responsibility that means being at Atletico Madrid.”

What seems set to be a new-look squad will look to improve on a good 2018-19 season for the club. They finished second in the La Liga table, well short of champions Barcelona but eight points clear of city rivals Real. They reached the last 16 of the Champions League but were knocked out by Juventus.

This weekend sees the final of the Copa del Rey take place and, with Atletico absent, Barcelona take on Valencia. Barca are 1.57 to make it a league and cup double with Valencia priced at 5.25.

The following weekend is the Champions League final and, with no Spanish involvement this year, an all-English affair sees Liverpool 1.95 to lift the trophy with Tottenham 3.80.