Posted by OLADIPUPO MOJEED on November 15, 2021 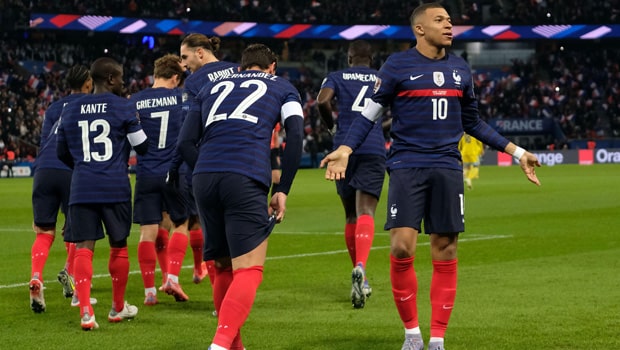 France striker, Kylian Mbappe has said Les Bleus has one of the best attacks in the world which imposes fear.

Speaking after the 8-0 walloping of Kazakstan, the PSG striker added that whether the current world champions are the best in the world is down to preference.

But he noted that what remains clear is that the players understood each other very well on the pitch and want to play for each other and for the national team.

Meanwhile, France have secured the 2022 Qatar World Cup ticket as the latest victory leave them on top of Group D on 15 points from seven games, four ahead of second-placed Finland.

Les Bleus will be visiting Finland in their final match on Tuesday.

Karim Benzema net a brace, Mbappe scored four. Other scorers include Adrien Rabiot and Antoine Griezmann to cap an impressive performance at the Parc des Princes.

This the world champions will be defending their crown in next year’s 32-nation tournament in Qatar.

This is also a good time for Mbappe who had never scored a hat trick with Les Bleus before. He becomes the first player to score four goals for France senior team since Just Fontaine in 1958.

The young striker also becomes the 12th player ever to get a 10-out-of-10 rating in French sports daily L’Equipe’s notoriously stringent ratings.

At 22 years, Mbappe who has now scored 23 goals for his country has played 52 games. He has also set a new record to be the first young French player to achieve that number of caps.

His return rate is seen to be better than that of Lionel Messi who has scored 13 goals from 45 caps for Argentina and Cristiano Ronaldo had 20 goals from 53 caps for Portugal at the same age.

France also have a better threat on the wing now with Kingsley Coman providing a wonderful performance. The 25-year-old  Bayern Munich winger, who missed the 2018 World Cup through injury a could form a three-man attacking partnership with Benzema and Mbape going forward.

Thus, the position of Griezmann in the team could be affected.

But in terms of balance, France seems to be a complete side from the goalkeeping department to the striking department. There is a back three that offers much more solidity, even in the absence of injured pair Presnel Kimpembe and Raphael Varane.

Didier Deschamp can rely on Jules Kounde or Dayot Upamecano as the pair represent the future.

There are also plenty of other young and talented central defenders like Ibrahima Konate, Maxence Lacroix, William Saliba, Wesley Fofana, Mohamed Simakan and Jean-Clair Todibo ready to seize their chance.

The 2022 Qatar World Cup is their 14th consecutive major tournament.