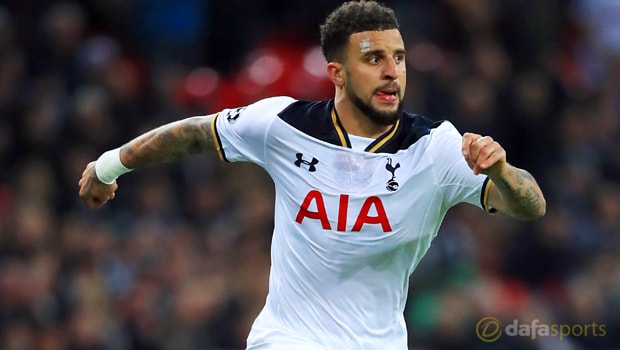 Tottenham defender Kyle Walker says he is confident that the squad can start to kick on and push towards a title challenge.

The north London club travel to face Manchester United on Sunday as they bid to try and break into the top-four.

Tottenham, who are priced at 21.00 to win the Premier League, fell to their first defeat of the Premier League season against Chelsea at the end of November but have since bounced back with a 5-0 thrashing of struggling Swansea.

However, despite having only lost once they have been held to six draws from their 14 outings and lie seven points adrift leaders Chelsea.

The likes of Arsenal, Liverpool and Manchester City hold on to the rest of the Champions League spots as the race for the title is already started to hot up.

Spurs were the only side left challenging Leicester for the title last term before slipping away towards the end, eventually finishing third, and Walker believes they can deal with the pressure better this time around.

The England international has also stressed the importance of turning draws into victories as they look to close the gap on their rivals.

Walker said: “We’re pushing. As we showed last season, we can cope with it. “We’ve been there in the top four, so hopefully we can do what we did last season – get on the accelerator and turn the draws into wins.

“Man City were flying and Liverpool have been steady all the way through. Chelsea didn’t have the best of starts and they’ve come through well.