Manchester City: Vincent Kompany out for a month 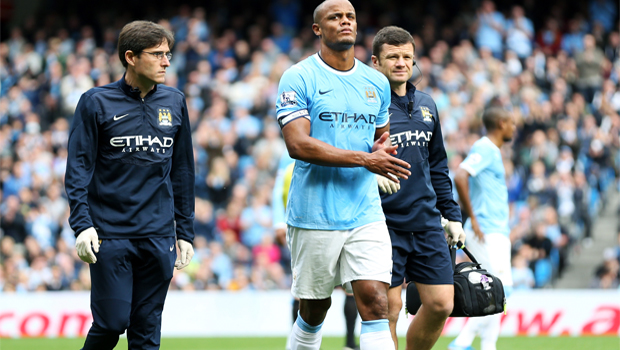 Kompany had not long returned to the Manchester City side after a spell on the sidelines but suffered a groin strain during the 3-1 win over Everton at the weekend and is expected to be out for four weeks.

His international coach, Marc Wilmots, has confirmed that the defender would not figure in either of Belgium’s two forthcoming Group A games against Croatia on Friday and Wales next Tuesday.

His absence leaves a place in the squad that could see Manchester United’s new teenage sensation Adnan Januzaj step up as a replacement.

The 18-year-old was actually born in Brussels before moving to the UK and although United have said that he would not be joining up with the squad, Wilmots has left an open invitation to the 18-year-old.

“I think that I have given a clear signal to Januzaj. It’s now up to him,” he said. “I wanted to integrate him into the group, without forcing him. I respect his choice and plan to talk to him and his entourage.”

Belgium lead Group A with a five-point cushion over Croatia and a draw in Zagreb on Friday would mean they reach their first finals in 12 years.

If they lose to Croatia, Belgium would still qualify as winners with victory in their last match against Wales on Tuesday.

Marouane Fellaini is expected to play his part despite a wrist injury.

The United midfielder missed Saturday’s 2-1 win a Sunderland and at some point in the near future will require surgery to correct the problem.