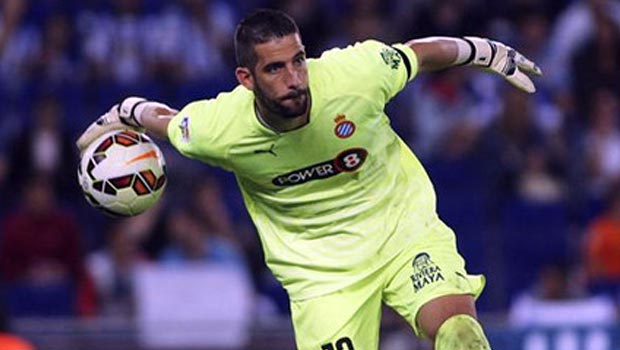 Espanyol are rank outsiders for their Catalan derby with Barcelona at the Nou Camp on Sunday, but goalkeeper Kiko Casilla is hoping to find some weaknesses in the host’s play.

The visitors have not prevailed at the Nou Camp in this one-sided derby fixture since 2009 and currently trail their illustrious neighbours by 17 points in La Liga, but that is not stopping Casilla from dreaming of a famous win.

“Although Barcelona have few weaknesses, they must have one and we have to use that to get something positive,” the goalkeeper said.

Celta Vigo’s 1-0 win in November proved that Luis Enrique’s side are far from invincible and Espanyol must use that as motivation.

“It is a challenge for us and we will try to do it in the best way possible, we must leave no spaces and do well in defence, which is essential if we are to do something good,” Casilla added.

Playing in a derby atmosphere excites the 28-year-old, who may also draw some inspiration from the fact he was a youth team player at Barca’s fierce rivals Real Madrid.

“Winning at the Nou Camp and being a derby, it would be one of the best things that could happen to me,” he declared.

Barcelona have no margin for error, having dropped to third spot after champions Atletico Madrid defeated Elche on Saturday afternoon.

League leaders Real, meanwhile, made no mistake as they dispatched Celta Vigo 3-0 at the Bernabeu thanks to a hat-trick from Cristiano Ronaldo.