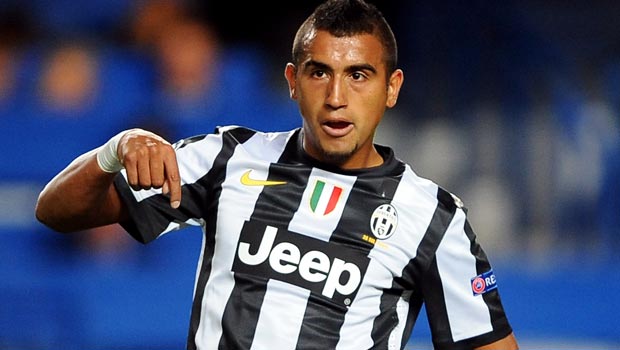 Juventus have ruled out a summer exit for midfielder Arturo Vidal who has been linked with a move to Manchester United.

Vidal has emerged as a summer target for United as they look to bolster their midfield for next season under new manager Louis van Gaal.

The Chilean was made one of the Premier League side’s number one priorities this summer and while reports across Europe claimed Juventus would be willing to sell for £36million, it now appears any deal is off.

The box-to-box midfielder is seen as a key part of the Juventus squad for next season as they begin life without former coach Antonio Conte, who quit earlier this month and has since been replaced by Massimiliano Allegri.

And when the new coach was asked about the future of his star player, he said: “Vidal? I am not worried that we will lose him.
“The club are strengthening an already competitive group. I’m really happy.

“We will need a striker. Strengthening a club like Juve is not easy but the officials are doing good things.”

General manager Giuseppe Marotta also reassured fans that Vidal would stay in Turin after signing a new contract extension last December through until 2017.

“Arturo signed a contract extension last season because there was a mutual desire to continue our relationship,” said Marotta.
“There is no reason for him to leave.

“I can confirm Vidal is happy to be with us and there’s no reason for alarm. Nobody can doubt the quality of the player, nor how strong his bond is with Juventus.”

Juventus will attempt to win a fourth successive Serie A title in 2014-15 and are 1.80 to retain the Scudetto.