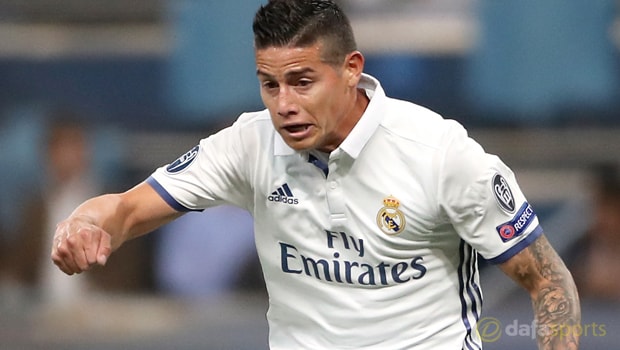 Serie A champions Juventus are refusing to rule out a move for Real Madrid’s James Rodriguez.

A transfer ban imposed on the European champions might stop the Colombia international from leaving until the summer but Juve are on alert after Rodriguez suggested recently he may need to leave the Bernabeu to gain first-team football.

The 25-year-old is behind the likes of Karim Benzema, Cristiano Ronaldo and Gareth Bale in the Spanish capital although Real boss Zinedine Zidane recently suggested he does have a future at the club.

Rodriguez earned his move to Madrid from Monaco after starring for his country at the 2014 World Cup in Brazil, where he was the leading goalscorer with six.

He is closing in on 100 appearances for the La Liga leaders but has been something of a peripheral figure under both Carlo Ancelotti and now Zidane.

Juventus general manager Beppe Marotta says the Turin club are in a position to attract world-class talent now and he refused to rule out Rodriguez coming to Italy.

“It depends on what we do in the transfer market,” Marotta told La Gazzetta dello Sport when asked specifically about Rodriguez.

“We have to respect the balance sheet, but Juve want to position themselves among the best clubs in the world and so it is and this is and always will be our ambitious objective.”

He highlighted how things have changed in recent times for Juventus, who have won five Serie A titles in a row, while insisting that transfer fees are not a worry now.

“Four or five years ago, we certainly could not have allowed ourselves to spend the figures we spent on players such as [Gonzalo] Higuain or [Miralem] Pjanic, but now we can,” Beppe added.

Juventus are 1.13 to win Serie A this season, while the Old Lady can be backed at 13.00 to win the Champions League crown.