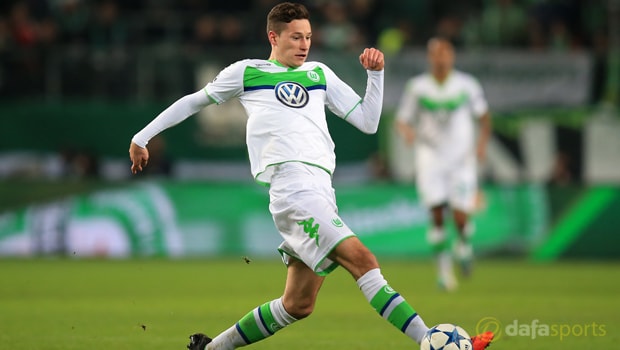 Want-away Wolfsburg midfielder Julian Draxler says he is in talks with a number of clubs ahead of a proposed move away from the Bundesliga in January.

The 23-year-old World Cup winner moved from Schalke in 2015 after Kevin De Bruyne had left for Manchester City but things have not gone to plan at the Volkswagen Arena.

Draxler sought a move in the summer, with Serie A champions Juventus leading the chase, but Wolfsburg told him he was not being granted a move.

That situation appears to have altered since, with former director of sport Klaus Allofs revealing earlier this month Wolfsburg were ready to listen to offers for a player who has been booed by his own supporters this season.

Wolfsburg are said to value their player in excess of £38m with Ligue 1 champions Paris St-Germain an interested party.

Reports in France have suggested that an offer closer to £25m may come from Unai Emery’s club.

The English press meanwhile are reporting that Premier League clubs Liverpool and Arsenal are keeping tabs on Draxler ahead of the transfer window opening next week.

For his part, the player says he already has multiple options on the table. Draxler told Bild: “I am in talks with a couple of clubs, but so far no decision has been made.

We will all sit down and make a sensible decision that is suitable for us.” He played for Wolfsburg in their 2-1 win at Borussia Monchengladbach on Tuesday and the club are certainly not about to cut their losses by allowing him to move on at a bargain rate.

“He showed his potential and his worth for us,” Wolfsburg’s new sporting director Olaf Rebbe insisted.

Wolfsburg are 1.85 to win their next Bundesliga game at home to Hamburg on January 21.