Juventus back amongst the elite 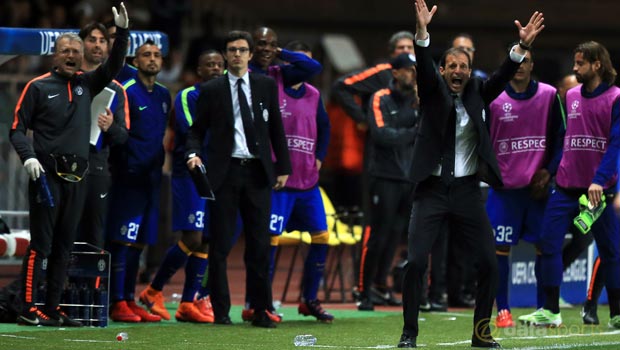 Juventus head coach Massimiliano Allegri believes the club are heading back towards the elite level in Europe. after they booked their place in the last four of the Champions League.

The Old Lady of Turin overcame the challenge of Arsenal’s conquerors Monaco in the quarter-final of the competition to book their place in the draw for the semi-finals, which takes place on Friday.

Whilst goals were flying in on Tuesday as both Barcelona and Bayern Munich waltzed their way into the last four, they were harder to come by on Wednesday as Real Madrid edged past Atletico 1-0 and Juve had to rely on Arturo Vidal’s first leg penalty, with a goalless draw at Stade Louis II enough to see Juve through to the final four.

It is the first time in over a decade that Juve have reached the last four and Allegri is hoping that they can become regulars at this stage of the competition, although they are the outsiders to pick up the trophy at 8.00.

I want to celebrate with the fans – it is turning into a great year for Juventus,” Allegri was quoted as saying by UEFA.com. “There were signs of us becoming a great European team again.

“Monaco produced two big performances, but we had to be brave and we were. It is always difficult reaching the semi-finals but we made it, all credit to our players.

“We are a group and we gave it our all. Although we did not play a great game, we were ready for every situation and we did what we had to do.

“My players were hit by a virus, they were sick, so we have achieved a big thing by qualifying here. Twelve years on we are in the semi-finals again. I fear no-one – we will play the best teams in Europe and this will be a very exciting challenge.”