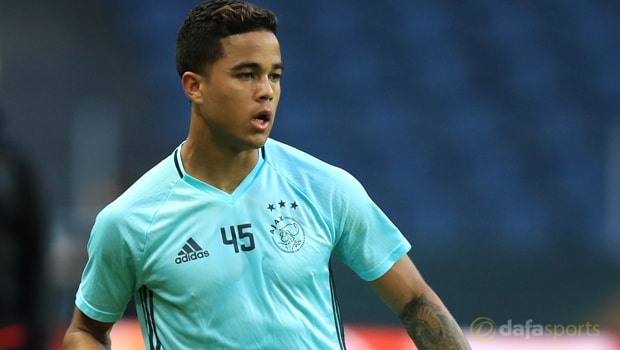 Justin Kluivert admits it is his dream to emulate his father by securing a future move to Barcelona.

The teenager has already followed in his father’s footsteps by graduating from the Ajax academy and making his debut for the Dutch club at the age of 17.

Since that breakthrough he has gone on to make 29 appearances for Ajax, scoring 10 goals.

The 18-year-old also made his international debut for the Netherlands as a late substitute during Monday’s 3-0 win over reigning European champions Portugal.

He took the place of Memphis Depay in that game and has been linked with Manchester United and other Premier League clubs already.

Patrick Kluivert joined Barcelona from AC Milan in 1998, having left Ajax for the San Siro and spending just one season in Serie A.

He scored 90 goals for the Catalan club and won the La Liga title in 1998-99. His son would relish any chance to make a similar journey in his career.

“To follow in my father’s footsteps? Yes. That is my dream club in the end. I would not mind going elsewhere but Barcelona is the dream.”

Winger Kluivert has scored seven goal in 24 Eredivisie appearances for Ajax this season.

His team trail PSV Eindhoven by seven points at the top of the Dutch league.

PSV are 1.06 to win the title this season, with Ajax 9.50 to overhaul the champions.