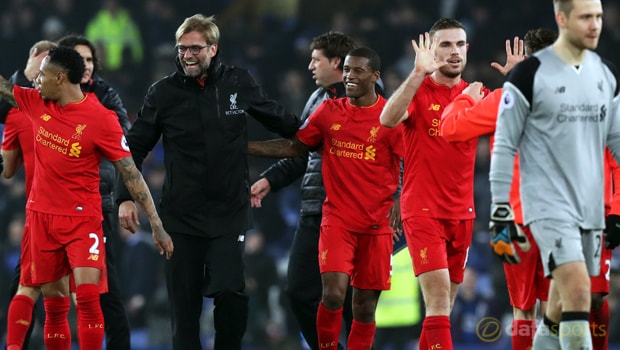 Jurgen Klopp is adamant his Liverpool side deserved their 1-0 Premier League win at Everton on Monday night.

Both sides had their chances at Goodison Park but it was Klopp’s men who finally found a breakthrough late on in the Merseyside derby.

The former Borussia Dortmund coach sent on striker Daniel Sturridge with minutes remaining and his shot rebounded off the post to allow winger Sadio Mane to tap home.

The Reds, 6.50 to win the title, moved up to second in the Premier League table thanks to their win but are still six points behind Chelsea.

Everton edged the first half but Klopp was adamant his team deserved to grab all three points by the final whistle.

“You saw the reaction of our supporters, so obviously they were happy, too. It is the best thing you can do on a night like this,” he told Sky Sports.

“We did not give a lot of chances away, I can’t remember one chance for Everton and whatever you want to do in a football game, you need to be ready to respect what an opponent wants to do.

“You have to play and let them run, then they lose being compact and then you can play channel passes.

So we did that second half much better, let them run, play simple and quick football, created more chances and could have scored earlier.

“But actually I do not care when, I take it when it is and I think it was a deserved win.”