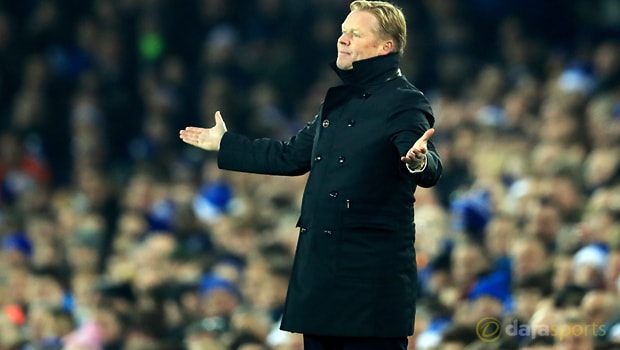 The Toffees eventually succumbed to a 1-0 defeat at Goodison Park, with Liverpool’s Sadio Mane grabbing the only goal of the game in the dying minutes.

Both teams battled hard for the victory as expected in the fierce derby clash but Mane eventually settled it when he reacted quickest to a Daniel Sturridge shot that hit the post.

Everton have won just one of their last five league games and that form has seen them drop to ninth in the Premier League table.

Despite their poor run, Koeman was quick to praise team for their effort and commitment during Monday’s encounter.

He told Sky Sports: “It was a very good team performance,. I think maybe it was the best first 45 minutes [since I arrived]. We were very aggressive and we had a big chance from [Ramiro Funes Mori’s] header.

“We made it very difficult and of course in the second half we had it more difficult, but the substitutes of Liverpool had a big impact on the final result.

“We did everything we could. We didn’t keep the ball second half as well as we did in the first, but the team didn’t deserve to lose the game because of the team performance.

“They have a really strong team and it was difficult in the second half, but in life you don’t always get what you deserve on the night.”

Everton will look to respond on Boxing Day against Leicester City when they travel to the King Power Stadium.