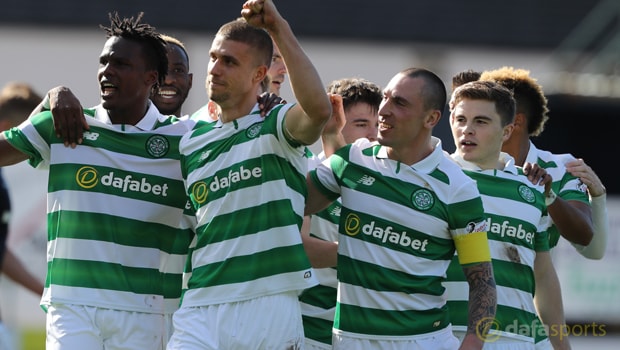 Jozo Simunovic is hoping Celtic get the chance to clinch the Scottish Premiership title on their own terms when they travel to Hearts on April 2.

Celtic have been sensational under manager Brendan Rodgers, who took over last summer, and are on the brink of winning a sixth straight league trophy.

The Bhoys have yet to lose in their 29 league matches so far this season, winning 27 and drawing the other two, and they are currently 25 points clear of Aberdeen in second.

Rodgers’ men will clinch the title with victory over Hearts a week on Sunday although they could already be crowned champions before the match kicks off.

The Dons make the trip to Dundee, who are sitting eighth in the table, two days earlier and a defeat for the visitors would officially confirm Celtic as the champions.

Simunovic, who scored in the 2-1 win at Dens Park last time out, is hoping Aberdeen can win so his side can retain their crown by their own doing.

He was quoted by Belfast Telegraph, saying: “The title is close and it’s very exciting. We’re excited about the next game at Hearts and we want to finish it off in the right way.”

Hearts, who are a massive 42 points behind the leaders, are the 7.00 outsiders to pick up a surprise win, the draw is priced at 4.50 while the champions-elect are strong 1.40 favourites.

France Under-21 international Moussa Dembele will be hoping to continue his fine debut season in the clash and add to his 32 goals across all competitions.

The 20-year-old has bagged 17 in the Scottish Premiership and currently leads the league’s scoring charts by two from team-mate Scott Sinclair.