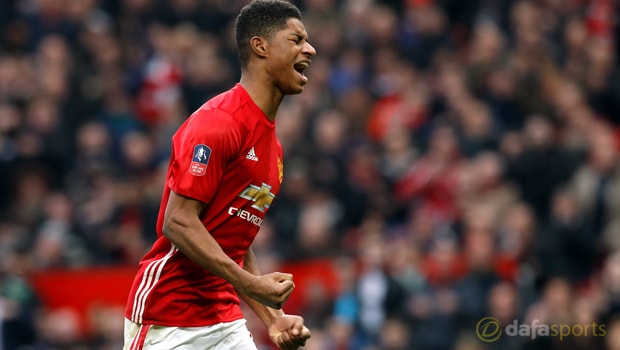 Manager Jose Mourinho says there is a chance Marcus Rashford could become Manchester United’s record goalscorer if he decides to stay with the club for the rest of his career.

Rashford, who has come through the youth ranks at Old Trafford, enjoyed a sensational breakthrough campaign last season and the striker managed to score five goals from 11 Premier League appearances.

The 19-year-old was even included in former England manager Roy Hodgson’s European Championship squad and, although only playing 21 minutes at the major tournament, he impressed with two solid substitute outings.

However, the rising English star has found first-team opportunities at the Red Devils limited this season following the appointment of Mourinho, who succeed Louis van Gaal last summer.

Just eight Premier League starts have been made although he has been able to find the back of the net on three occasions, highlighting his quality in front of goal.

Rashford bagged two strikes in the 4-0 FA Cup third-round victory over Reading last time out but that was overshadowed by Wayne Rooney’s goal, which moved the captain level with Sir Charlton on 249 goals for the club.

It will take a monumental effort for anyone to get close that mark but Mourinho believes there is a chance United’s youngster could one day break that record.

He said: “Marcus, he is 19. If he plays Man United until the end of his career, maybe Marcus can do it but Rooney scored a lot of goals.”

United are back in action on Tuesday when they play host to Hull City in the first-leg of the EFL Cup semi-final and the home side are 1.18 favourites to get the win, the draw outcome is priced at 6.50 while the Tigers are quoted 13.00.