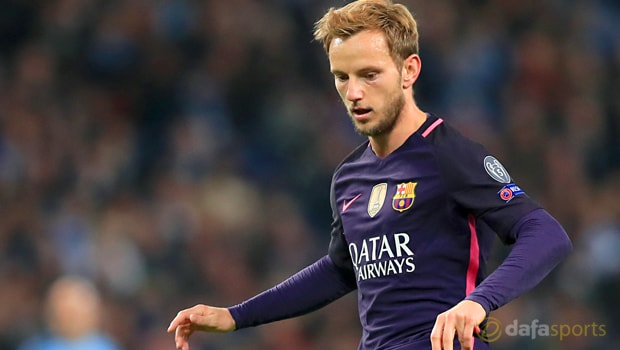 Rakitic was left out of Barcelona’s squad for Sunday’s 1-1 draw at Villarreal and that prompted speculation about the Croatian international’s future with the reigning Spanish champions.

The 28-year-old, who arrived at Camp Nou in 2014 from Sevilla, was a regular fixture in the first team in his first two seasons, making 68 La Liga appearances and scoring 12 goals.

However, the midfielder has been used on more of a rotation basis in this campaign and he has only made 10 league starts from a possible 17, leaving doubts over his time at the club.

This has led to speculation the Citizens, who are 7.50 to win the Premier League, could make a move in the current transfer window as manager Pep Guardiola, who spent four successful years as a manager with Catalans, aims to strengthen his squad for a title push.

But, Enrique has been quick to dismiss these rumours and insists Rakitic will not be going anywhere as he is a valuable member of the squad this term.

“It’s up to me to decide the squads and the teams. That’s my job,” he said. “What’s been published has nothing to do with that.

Only 25 per cent of things are true, be it in the Croatian, Spanish, England, Italian media.”

Barcelona’s draw on Sunday has left them five points adrift of leaders Real Madrid, who have a game in hand, and the defending champions face a tough battle to retain their crown.

Enrique’s men play host to Las Palmas in the league on Saturday and the home side are quoted 1.10, the draw is priced at 9.00 while the visitors are trading 23.00.