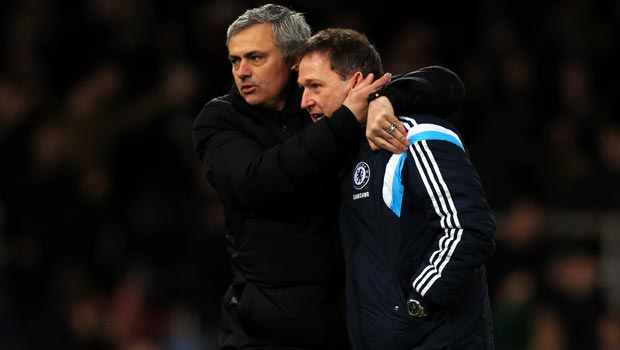 Jose Mourinho hailed the battling qualities in his side as Chelsea strengthened their grip on the Premier League title with a 1-0 win at West Ham United.

Chelsea won the Capital One Cup at the weekend and, thankfully for Mourinho, his players recovered quickly to pick up another three points to consolidate their five-point lead at the top of the table.

It was a far from convincing performance by Chelsea and goalkeeper Thibaut Courtois was forced to pull off a number of fine saves to keep the home side at bay, as the Blues rode their luck in the first half.

However Eden Hazard’s header on 22 minutes was enough to wrap up the win, and Mourinho had nothing but praise for the battling qualities displayed by his side at Upton Park.

“When good football is not enough, we fight, we suffer together, we cope with difficult moments,” Mourinho said.

“It was not the best game to play after the final. The final is more than a game, because of tension, pressure and emotions.

“Some periods we had to defend with everything. It’s a game where you easily can lose two points. We had chances to kill the game. We were expecting that.

“We didn’t and when you don’t do that against West Ham you are in permanent danger. Great victory for us.”

The win leaves Chelsea five points clear of Manchester City, who have played a game more, and the west Londoners now enjoy a rest due to their non involvement in the FA Cup this weekend, before returning to Champions League action against Paris Saint-Germain.