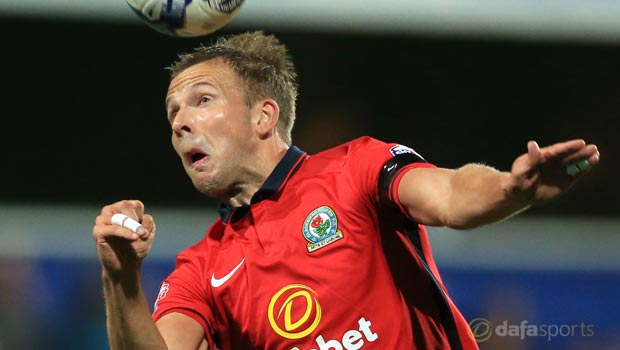 Blackburn Rovers striker Jordan Rhodes admits the summer interest from Championship rivals Middlesbrough was “very flattering” but he now wants to get on with life at Ewood Park.

The in-form frontman was linked with a move to the Riverside Stadium throughout the summer as Boro boss Aitor Karanka looked to seal a deal for the Scotland international.

Rhodes made the somewhat controversial decision to publicly declare his interest in pushing through a move to the north east, as he said in July he was ‘unhappy’ to be denied the chance to talk to Boro.

Ultimately no deal went through for the 25-year-old as Blackburn owners Venkys stood firm and didn’t let the striker leave, even when a record £14 million fee was dangled in front of them.

However, Rhodes has started the season in good form for Blackburn and he was named Sky Bet’s Championship player of the month after bagging five goals in four games.

The 25-year-old has told the Daily Mail that he is now focused on playing for Blackburn and wants to do his talking on the pitch to help Rovers climb the table.

Rhodes said: “For that sort of money and for the manager there to say the things he did was very flattering

“But I’m a Blackburn Rovers player and I do enjoy coming in here every day and enjoy going out at three o’clock on a Saturday afternoon and putting on the blue and white shirt.

“There’s going to be things that are going to be put in the media about yourself or the club whether they are true or false.

“You just get on with it. Until you’re told by someone that something is happening then you just carry on because, ultimately as professionals, we can’t be affected by someone.

“All we can affect is what we do on a day-to-day basis and on matchdays.”

Blackburn Rovers are on offer at 26.00 to be promoted from the Championship, while Middlesbrough are the 1.44 favourites to win promotion to the Premier League come the end of the campaign.