Jordan Pickford tipped for the top 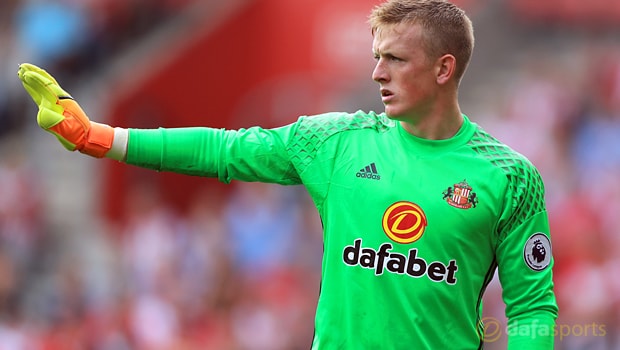 The 22-year-old has taken his opportunity with the Black Cats this season after being handed the chance to play in the absence of Vito Mannone.

Sunderland, who are priced at 1.40 to be relegated, sit bottom of the Premier League with just one win from their opening 11 games, but Pickford has been a shining light for boss David Moyes.

Pickford’s performances have not gone unnoticed by England’s interim boss Gareth Southgate, who called the stopper up for the current round of international fixtures.

The Washington-born man has represented England at every level from Under-16 up to the Under-21s and appears to be on the verge of earning his first senior cap.

Pickford was an unused substitute for the victory over Scotland last week and will likely watch on again from the sidelines against Spain on Tuesday at Wembley.

However, Anichebe, who joined Sunderland this summer, feels he will force his way into the starting line-up sooner rather than later.

Anichebe said: “Jordan, you can all see is a top young goalkeeper. Some of the saves he makes and his distribution; it is incredible.

”He is a phenomenal keeper and if he can keep his feet on the ground, continue to work hard, then he will one day become England’s number one.”