Jermain Defoe in no mood for January sales 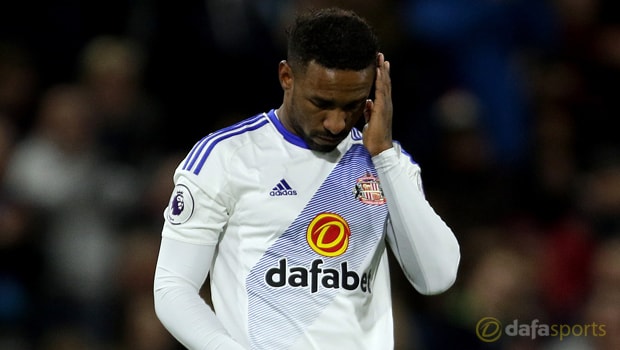 Jermain Defoe has moved to allay fans’ fears he could quit Sunderland in the January transfer window to re-sign for West Ham United.

The 34-year-old scored a remarkable 15 goals in the Premier League last season as the relegation-threatened Wearsiders masterminded another successful escape act, and this term he has already found the net eight times.

West Ham have seen their attacking options hit by an injury to Diafra Sakho and manager Slaven Bilic this week described Defoe – who scored 41 goals in 105 games for the Hammers between 1999 and 2004 – as a “very good player”.

It prompted a quick response from his Sunderland counterpart, David Moyes, who said he had no intention of selling his star striker.

Defoe responded by suggesting he was not shocked by the speculation and would continue to keep his head down.

“There’s going to be speculation because, let’s be honest, the people that score goals are wanted,” Defoe told Sky Sports News HQ.

“Over the years, anyone that has scored goals has been talked about in terms of moving to different clubs. “I think it’s just part and parcel.

The players don’t really get involved; you just get your head down and you play football.

“It’s a good feeling to be wanted but when you’re playing well and scoring goals then you must be enjoying being at the place you’re at.”

Sunderland travel to take on Burnley on Saturday and Defoe can be backed to score the last goal at 5/1 in a Dafabet price boost.

Burnley are quoted 2.40 in the match betting and the draw outcome is on offer at 3.20, while Moyes’ men are currently priced 3.20.

Goalkeeper Vito Mannone is expected to make his first Premier League appearance since August, with Jordan Pickford out with a knee injury, while Adnan Januzaj returns after being ineligible to face parent club Manchester United.