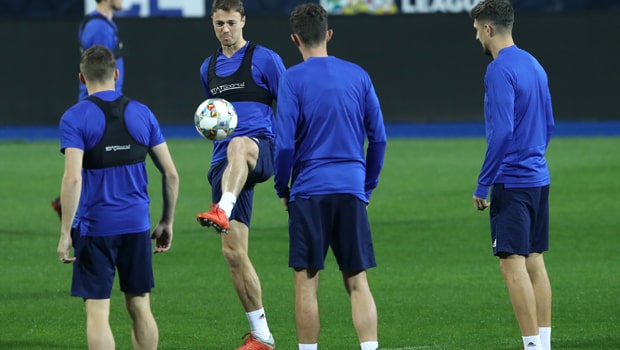 Former Manchester United skipper Keane is Martin O’Neill’s assistant manager in the Ireland set-up and Evans suggests the ex-Red Devils skipper still has ‘that hold’ over him.

Belfast-born Evans played under Keane during loan spells at Sunderland after he had joined Manchester United himself. Now 30-years-old, the experienced defender suggests Keane’s on-field attitude still comes to mind when things get tough.

“Keane was the player I looked up to most when I was growing up as a United fan. He was the United captain and then I went on to play for him at Sunderland in two loan spells,” he told the Belfast Telegraph.

“He was a big inspiration for me and I still think of him a lot when I am on the pitch. I think ‘well, if Roy Keane was in this situation and things were tough then he’d roll his sleeves up and continue fighting’.

“Sometimes maybe I think ‘is he still watching me?’ – he’s still got that hold on me!”

Northern Ireland have lost their last three UEFA Nations League games and, while it may only be a friendly, Evans expects Thursday’s Aviva Stadium clash to have a competitive edge.

Evans has only played against the Republic in a behind-closed-doors match in 2015, which ended scoreless, as he missed the 5-0 thrashing in the 2011 Nations Cup.

“Obviously we had the game behind closed doors a couple of years ago and, even though there were no fans there, there were still a few challenges going in – but they were made in the right way,” he added.

“I think this one will be a competitive fixture and a good game to watch.”

The Republic are favourites at 2.10 for the Dublin tussle, with Northern Ireland 3.80 to win and the draw priced at 2.88.